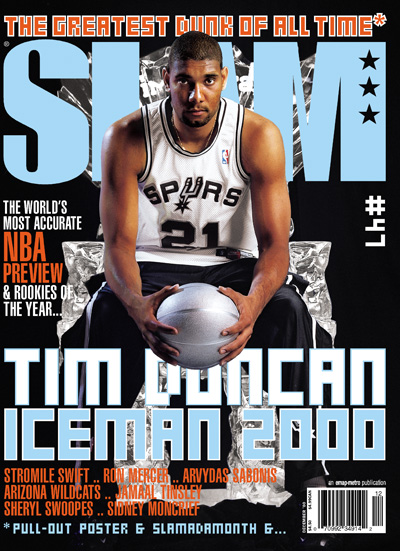 The 6th Man: Scoop’s call, when it came, was short and to the point. “Got Ice.” This came as more of a relief than “We Are the World” and Live Aid combined.

But maybe you need some background first.

We’d been thinking about putting Tim Duncan on the cover for a while. The first time it seriously came up was ’round about the Sprewell cover, when the Spurs were crushing all comers on the way to that first title. But when it came right to it, Spree seemed more compelling (and Tony was and is the biggest Knick fan this side of Spike Lee). So, Spree. Then things just happened. LO, KG, KB8—months went by and still no TD.

We weren’t ignoring him—we aren’t blind or anything. The big problem was, what were we gonna do with him? He was a swimmer growing up, but the thought of a Spurs-logoed Speedo didn’t go down all that well, even around Olympics time. Going to St. Croix for a shoot sounded great, but our jet was in the shop getting a new system (and Mark Cuban wouldn’t let us use his to big-up his cross-state rivals). What to do?

Of course, as is usually the case, the answer was sitting there all along. On my wall, of course, where it has hung for years. On a faded page torn from a magazine, the classic Nike ad featuring George “Iceman” Gervin in his silver warm-up suit, coolin’ in his ice throne. Wheels began turning. “Let’s shoot Tim Duncan in a silver warm-up suit with ‘Ice’ on it!” Kidding, y’all. TD’s cold. He’s a Spur. The ice throne had to happen.

The basics were easy—the Spurs’ Tom James connected us with TD; we actually found an ice sculptor in San Antonio who would do a throne on short notice (if any of you out there need one, just give us a call—we’ll connect you). But the last part proved the toughest. I didn’t want to do this without Ice’s approval, and he wasn’t getting back. The shoot went down, still no word. Things started to get nervous.

Nightmarish scenarios started forming. Ice would hate the concept and we’d have to re-shoot. Then, since Tim wouldn’t want to do another shoot, we’d have to put Bobby Knight on the cover. Or Manute Bol.

Then, with the clock winding down, the two-word message that changed the world. You thought Michael Jordan’s “I’m back” was big? No way. Nothing in the world compares to “Got Ice.”

P.S. Patrick Ewing’s a what?