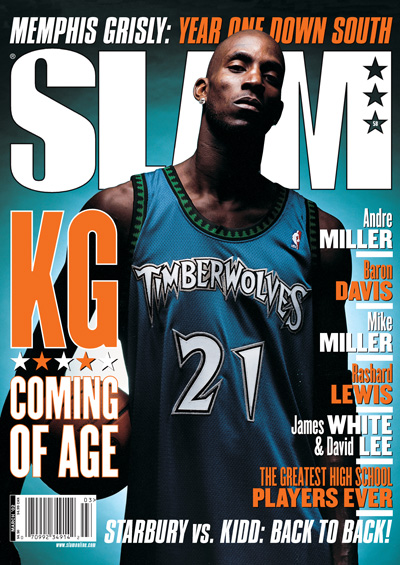 The 6th Man: When Pacers rook Jamaal Tinsley dropped 23 assists on Michael Jordan’s Wizards (on national television, no less), the number didn’t go unnoticed. It was the most exciting 23 of the day—something that never would have happened in Money’s prior life. Still, this was no fault of Mr. Jordan—battling knee problems and a badly sprained roster, MJ and the Wiz just weren’t ready. But even more than all that, it was Tinsley.

In a League filled (allegedly) with underage prodigies who care more about the numbers on the back of their Range than they do about the numbers in the stat box, Tinsley stood out. A four-year starter at Iowa State, he was unselfish in all senses of the word (look where his one-time teammate, Marcus Fizer, got picked the year before), and immediately slid into the starting spot with the playoff-bound Pacers. That one game—on Thanksgiving, no less—was a revelation. Virtually every time down court, Tinsley made the right decision. Free to take countless runners in the lane, instead he’d wait the extra half-second, draw the opposing big man, and thread the ball through to center Jermaine O’Neal (who’s having an All-Star season himself—guess why?), path opened up for an easy deuce. Or he could kick it out to Reggie Miller or Jalen Rose, as wide open as they’d ever been.

With all respect to fellow rook Tony Parker (starting in San Antonio), Tinsley is the most NBA-ready point guard to hit the L in years. He did everything the right way, prepared the best he could for the job he has. Which is why, of course, he was selected with the 27th pick of the Draft, then traded twice before he even put on a uniform. As opposed to the first overall pick, Kwame Brown, who jumped straight from high school and has been getting cameo minutes for—yeah, the Wizards. Any owners bitching about the overall age and preparedness of the rookies better look at themselves first. Or better yet, look for guys like Tinsley. They’re out there.

Then again, some guys make the leap better than others. Like, uh, the guy on the cover. Since he bounced straight from the prom in ’95, KG has been setting standards. Now he seems ready to take that next step. We’ll be watching.