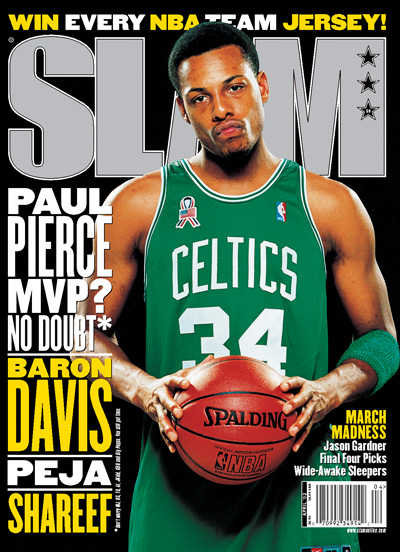 The 6th Man: For starters, I’m an idiot. Yeah, we could be like everyone else and hide the corrections on the bottom of page 64, upside-down, in Swahili, six months after the actual error was made. But heck, I’m a stand-up guy. I can admit I made a mistake. And in last issue’s Sixth Man I stated that Jamaal Tinsley was a four-year starter at Iowa State—when he actually spent two of those years at Mount San Jacinto Junior College. That was a big one. My bad. Samahani.*

Anyway…I remember being scared for Paul Pierce. It was a couple of weeks after I interviewed him for a feature that he was stabbed. Violence has rarely taken those I care about, and this was about as bad as it could be. I’d only met Paul a few times, but that was enough to realize this was a guy I’d be glad to consider a friend. Forget what he does oncourt—his personality and vibrance off it set him apart. And here he was laying in a hospital room, career—and life—in doubt.

I remember being scared for Baron Davis, too. This was before the Draft, before the chunky kid with the kangaroo hops decided to bounce out of UCLA. It was a typical fast break, one that ended with Baron throwing down and turning in the air to return upcourt. Only that’s not the way it worked out. A knee gave out, Davis went down, and he was carted off, future bounce—and career—in doubt.

Well, everything worked out. Pierce shrugged off his injuries and turned in an MVP-worthy performance last year, only to redouble it this year. And with him and Employee No. 8 clicking daily, it appears—MVP or not—he’ll at least return the Celtics to the playoffs. And Baron’s knee surgery didn’t affect his Draft status (he went third) or his bounce—only an ill-placed headband kept him from a Slam Dunk crown. If all goes right, they should be All-Star teammates this year, both making the first of what will be many appearances in the midseason classic.

But for now, here they are, two West Coast ballers tearing up the East, on our covers (that’s right, there’s two of ’em). Initial plans called for one, and we shot them together for that purpose (see the poster). But in the end, we thought both deserved their individual shine. Paul and Baron both still inspire fear, but now people are scared of them, not for them. I like it like that. And I’m sure they do, too.

*That means “sorry” in Swahili.