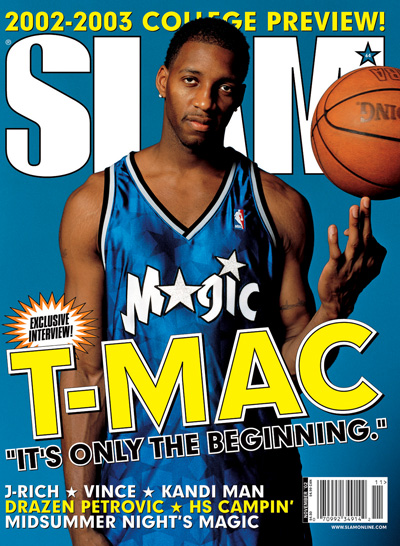 The 6th Man: This photo is not real.

Don’t take that the wrong way. No, we didn’t find a TMac lookalike, or airbrush off his tattoos, or get all ILM with the blue screens. This is really Tracy McGrady, he’s really in the Magic practice facility, and he’s really dribbling. But it’s a set-up, a sham, a mockery.

You see, Tracy McGrady doesn’t play basketball in the summer. Now, that doesn’t mean that he doesn’t pick up a ball. Oh no. He still shoots, still works out. (He’s definitely bigger than he was the last time he was on the cover two long years ago.) But you won’t find TMac in a run. He won’t be at the Rucker, he won’t be at Venice. You won’t see him at West 4th street, unless that Code Red commercial comes on.

But TMac does have something in common with the summer ballers—he has something to prove. Despite his Kobe-like personal digits, Tracy has never been out of the first round of the playoffs. So while he may not be feeding that ball jones this summer, it’s cool—he wants to stay hungry.

And while T-Mac lifts, there are still those out killing on the court. Like Curt Smith (pg. 102) who’s been holding it down in DC for years. Or Erron Maxey and Mike Campbell (pg. 40) who are kings of their respective coasts (and have the billboards to prove it). Or even Jason Richardson (pg. 56), who, if what he says is true, will be setting off those ridiculous dunks off one foot next year as well as two.

P.S. Big ups to our main man Kevin Willis, who signed with the Spurs right before we went to press. Life starts after 40, huh?