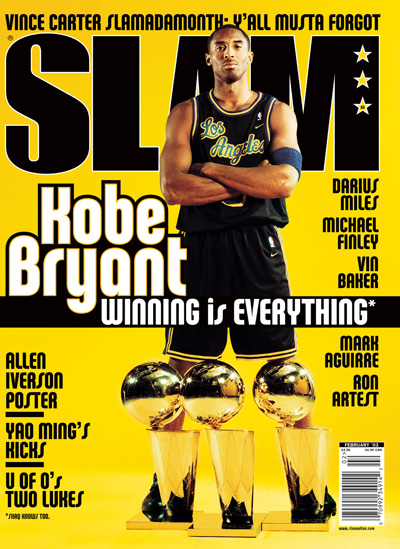 Talk to Kobe Bryant for any amount of time, and the conversation always turns to basketball. He asks questions as well as answering them. He (almost) literally lives and breathes the game. Like Mike? Yes, in his single-minded approach to be the best. Now, at 24, the kid has it within reach. Remember, at 24, Michael had only won one playoff game. Kobe already has the first threepeat. Bill Russell rings aren’t out of the question.

The thing about Michael—the player and person Kobe resembles, like it or not, in so many ways—is that he had time and space to develop. Not only did he have those three years at North Carolina, but the basketball world was a lot different in the mid-’80s. There was no internet (at least not for regular people), no NBA TV, no real magazines covering the League (except Sports Illustrated). One early SI feature showed MJ playing miniature golf with teammate Rod Higgins, still in their warm-ups.

It doesn’t work that way now. Now you have (literally) world wide websites sending writers to games, newspaper columnists from Peoria to Paris, TV guys from every network, all looking for their own angle. Everything is placed under a microscope. So while Michael had the time and the space (and Wieden + Kennedy) to find himself, Kobe has bodyguards. He’s been studied and dissected since day one. He wears a throwback jersey to a game, it’s news. He wears them for a week, and it’s on the front page.

So this issue we try and get into who Kobe really is. Not by watching what he wears or what he does, or by asking others, but by asking him. And if it seems that he still isn’t totally sure where he’s gonna end up, you should at least understand that he’s heading in the right direction.