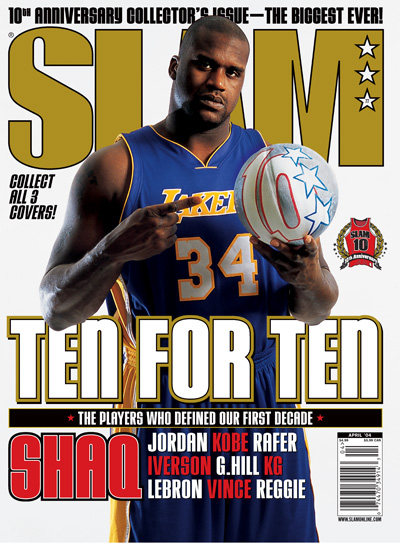 On the event of our 10th Anniversary (you’re gonna be reminded of it on just about every one of this issue’s 230-plus pages), I want to give some thanks to everyone who helped make this mag what it is. Some shoutouts, if you will. If I forgot you, send a letter to Trash Talk. (That way I can dis you again!) And before I even get started, thanks to David Aldridge (’cause I’m stealing his format—sorry, DA).

So, thanks. To Dennis. To Tony, Anna, Dave and Don. To Susan, Ryan, Khalid, Lang and Ben. To Scoop. To Melissa. To Ivan and Jenny. To Michael, Alan, Bonsu and Nima. To Bönz and Bobbito. To Ronnie, Jonathan, Kris and Andrew. To Teri, Andrea and the Commish. To Sammy and Aaron, and Jonathan and Gary. To Karen and John and Tim and David and…man, everyone in the Blue Book. To Clay and Atiba and Michael and Jonathan. To Marvin and Carmelo. To LeBron and Sebastian and Stephon and Andre and Edmond and Eddy and Ray and Mike and Ronnie. To Travis and Jenny and Theresa and Nate and Sheldon and Dinusha and Kristen and Errin and Leslie and Zuhairah and…

OK, I give. I could go on literally for pages and pages and never finish. So many people have helped make this magazine what it is today, you’d end up reading (or, more likely, not reading) something that looked like The Roots’ unabridged liner notes. So let’s focus on three guys.

The biggest thanks, of course, have to go out to Shaquille O’Neal, Allen Iverson and Kevin Garnett, One center, one guard, one forward. One from the West, one from the East, and one from right smack dab in the middle. Each of them representing, in some sense, everything that SLAM has stood for, and everything that the League has meant to us. Dominance, determination, excellence. And it goes further. AI and Shaq agreed to do these photo shoots while they were hurt, and KG was—well, he was just KG. That was huge. This issue doesn’t come together properly (or maybe at all) without them. So no matter what the reaction to this issue is—and we think it’ll be good—we’ve already gotten all the love we can handle. But hey, a little more never hurt. We just hope we give as much as we get.

PS: Obviously, thank you most of all to everyone who’s reading this (whether you paid for it or not). Corny as it might sound, if you weren’t reading, we wouldn’t be able to do what we love.