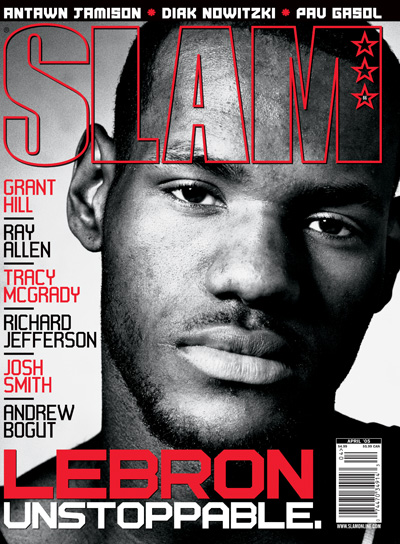 The 6th Man: This is crazy: There seems to be a proliferation of interest lately in the connection between hip-hop and basketball. Articles in major newspapers, even books, have been written on the subject in recent months. We’ve received our share of calls on this “phenomenon,” of course—apparently we’re the foremost authority on the subject—and our response has been the same every time.

Why now? Why this sudden fascination with a link that’s existed at least since Kurtis Blow released “Basketball” back in 1984? Oh, it’s about players being rappers themselves? So what about Shaq’s debut, Shaq Diesel, which came out in 1993? Or B-Ball’s Best Kept Secret, which included MC turns from (among others) Jason Kidd, Gary Payton and Dennis Scott. All this attention of late can’t be due to Troy Hudson’s—excuse us, T-Hud’s—record, can it? Or maybe Ron Artest’s?

Hip-hop is part of basketball, part of us, part of the culture and the entire urban landscape. Whether it’s Allen Iverson blasting the latest Jigga in the locker room before games, And 1 organizing the Mix Tape Tour, Dajuan Wagner’s DMX-inspired ink, or Snoop sitting front-row at Laker games, could the connection be more obvious? The Sixers mascot is named Hip-Hop, for Reverend Run’s sake. For our part, a few years ago, when he was asked about doing an interview with us, Nick Van Exel said, “Oh, SLAM, the hip-hop magazine?”

Admittedly, we probably brought a little of this on ourselves—having Anthony Mason and the Beastie Boys interview each other way back in SLAM 3, a habit we continued with Van Exel and Ice Cube in SLAM 6, then Allen Iverson and the Roots (which in retrospect was kind of, um, forced) in SLAM 17. We eventually stopped with the blatant cross-promotion, because, quite frankly, we thought it was too obvious. You know—too easy.

And yet here it is again in the headlines, at the bookstores. Basketball and hip-hop, both long known as outlets for urban and would-be urban youth, are connected! Wow. Maybe we’re just ahead of our time.

P.S. We know LeBron wants you to believe he’s wearing the mask because of that New Year’s Mutombow, but we think he’s actually just a big MF Doom fan.