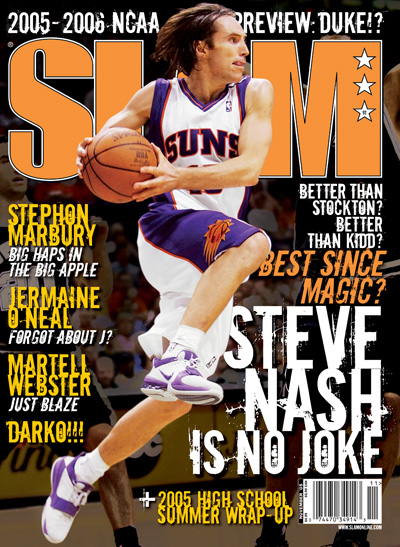 The 6th Man: Steve Nash is the 2005 NBA MVP. He was the catalyst for the most exciting team in the League last season. And, from our experience, he’s one of the coolest and least-affected guys in the game. Given all that, he’s more than earned his first SLAM cover.

So here it is.

With all due respect to Nashty Nash, though, I’m gonna use the rest of this space to talk about us—the mag you hold in your hands, and all we claim to stand for. We’re into our second decade now, creeping up on our 100th issue, and lately we’ve spent a lot of time talking about our place in the game. When SLAM hit back in ’94, the landscape was a lot different. The idea of a mainstream sports mag repping the culture of the game and its players was pretty much unheard of, and SLAM’s ability to do so was what set us apart. Still does. What has changed, from our not-so-humble perspective, is that the “mainstream” has spent the past 11-plus years trying to catch up. Hiring away our writers? Putting MCs and streetballers on the cover of their mags? You know what they say about imitation and flattery, so I guess we’re honored. But really, all that following has served as a reminder that we need to continue to lead.

So here we are, 92 issues deep, bringing it back to the old school…sort of. If you’ve been down long enough, you know the earliest SLAM covers were mostly action shots. Since then, we’ve generally relied on great portrait photographers to do their thing, and we take pride in our ability to get AI, Kobe, KG, LeBron and the rest of the L’s best to sit for our cover shoots. (They call that juice, right?) The trick is finding a balance, moving forward while respecting our history—and, whenever possible, giving you guys what you want. With that in mind, check the dual Nash covers (both available everywhere), and tell us which one you like better. Then check the new-look Hype section, which we’ve loaded up with more players, more pictures, more sarcasm and our man Dave Zirin, the most conscious and passionate hoops writer we’ve run across in a minute. Why all the changes? Because, as our man Thad says in his latest Basketball Diary, “When you stop, that means somebody’s passing you.” Passing us? Never.