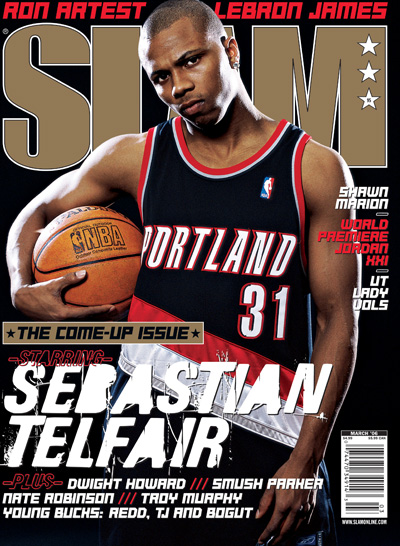 The 6th Man: We fully expect some of the same only-happy-when-they’re-unhappy types who bitch and moan when LeBron gets another cover to whine and complain when they see these unproven second-year cats on the front page—and we’re fine with that. (You hate because you love, right?) With that in mind, while we feel no need to try and justify this month’s cover choices, we are more than happy to explain them. I mean, I gotta fill this space somehow…

Thankfully, the PR staffs of the Portland Trail Blazers and Orlando Magic have made it easy. It wasn’t until after our covers were shot and the stories written that I noticed the teams’ 2005-06 media guides. The front of the Portland guide features Zach Randolph, Ghostface Przybilla and our man Bassy, and if you look closely enough, you can see that Sebastian, if ever so slightly, is the most prominent player there. As for Orlando, you don’t even have to look that close. Grant and Stevie both play the back to Dwight, the young big man, front and center.

These aren’t accidents. Teams put some thought into these, whether it’s the Lakers selling hard-to-buy unity with Phil and Kobe virtually arm-in-arm on the cover, the Cavs showing a montage of their entire roster to make the point that it’s not all about Bron (honest), or teams like the Grizzlies and Jazz slapping massive team logos on the front because they don’t have any actual stars. With the Blazers and Magic, the message is clear: These kids are the future, our future, and we want to make sure they know it. And in this case, we believe them.

All of which is a long-winded way of saying, Welcome to The Come-Up Issue. Their stories are different, but each of the guys featured this month fits the bill on some level. It’s Smush Parker trying to come up like Skip, working to finally earn the respect that only a long-term deal can provide. It’s Troy Murphy coming up into the consciousness of folks outside the Bay, now that he’s finally on a team with real playoff hopes. It’s the Milwaukee Bucks (who have no idea how close they were to being on the cover), steadily coming up into title contention if all goes as planned over the next few years. And it’s Sebastian and Dwight, claiming their first solo covers and coming up strong to prove the Lottery status and high school hype were justified. Ready or not…