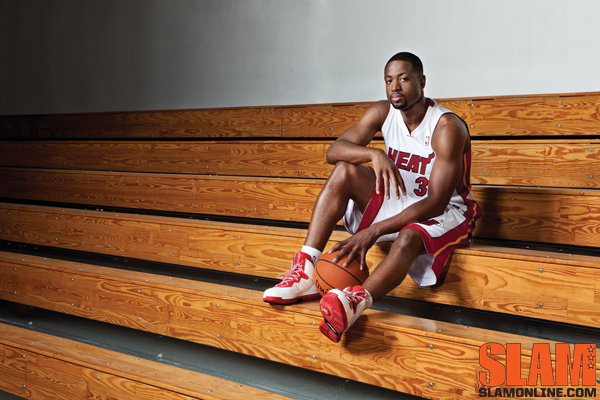 The answer is simple: Dwyane Wade and his “mediocre” numbers are the reason that the Miami Heat has evolved from Champions-in-theory to actual Champions.

If only people understood.

“I know everyone has an opinion and everyone has a right to exercise that opinion,” Wade told me at a late-October photoshoot. “It just sucks that people don’t really understand the reasoning why. When we got together the first year, I averaged 25, LeBron averaged 26 and it doesn’t work. Everybody was talking about, ‘Well, they have to find a way to make it work.’ Then when we find a way to make it work, and everyone talks about this and that. They don’t really understand.”

They don’t understand the finite difference between losing in the 2011 Finals to the Dallas Mavericks and winning in 2012 against the Oklahoma City Thunder was some nuanced and inspired coaching by Erik Spoelstra. That it was mostly due in large part to Wade graciously handing over the ball and keys of the team to one of his best friends.

“He had the humility to take a step back to allow LeBron James to become the greatest player in the world,” says David Fizdale, an on-the-rise assistant coach with the Heat. “If he would have kept competing at the level he was competing at to show who he was, LeBron would have never developed to that. That’s the reality of it.”

“He’s like,” Lisa Joseph, Wade’s business manager, says of Dwyane’s mindset, “‘I’ll get all the accolades at the end of my career. I’ve won a gold medal; I’ve got a ring; I know what this feels like and I want it again and I’m not going to be able to do it on my own. So I don’t have a problem taking that step back.’”

Taking a step back, in this case, meant helping the Heat taking a step forward. Meant earning the cover of SLAM 164.

While you can read my full cover story on Wade in the magazine (This is NOT the actual story in the mag—Ed.), there was lot of stuff that I had to cut out of the story due to spatial constraints. With that in mind, here are a few noteworthy DWade items that you won’t necessarily find in the magazine:

•As much as everyone says that the teaming up of Dwyane, LeBron and Chrish Bosh was years in the making—and as much as it was—Wade is quick to point out that at 22 or even 25 he would not have been mature enough to swallow his pride and play with those guys.

“It’s all evolution; it’s all growth,” says Wade. “When I was young there’s no way I could’ve played with these guys. I was in competition with Bron and Melo (Anthony) and those guys. You get to a point where that doesn’t matter the same. We all competitors, but that same ‘I’ve got to make a name for myself thing’ goes away after a while. You understand there’s a bigger picture.”

•For that matter, according to Joseph, Wade would not have been able to align himself with a brand like Li-Ning a few years ago. He wouldn’t have had the junk to make such a bold marketing move. As we all know though, as of this summer, Wade is now the face of Li-Ning, and hopes to take the shoe and apparel company to new heights nationally and internationally.

“He’s always thinking about the bigger picture now,” says Joseph. “This Li-Ning deal, let’s be real about it, most guys of his caliber would hear Li-Ning and walk away. Dwyane was like, ‘Hold on; let’s think about this. Does this make sense? What would this mean for my brand? What does this mean for the game of basketball? Is this a risk?’ We’ve had  countless conversations about this. It’s a huge risk for him. But it’s a risk that he was willing to take because he knew that in order to blaze a trail you have to be the first one to step out there. That would not have happened, obviously, nine years ago.”

•Despite somewhat declining stats and the toll taken by myriad injuries, Wade still firmly believes that he could be one of the top scorers in the League. He just understands that, after leading the L in scoring in 2008-09, it’s just not that important.

“I mean, if you put greatness on scoring, than that’s just you don’t know sports,” say Wade. “I could go out there and shoot enough shots where I could average 26-plus a game, but that’s just not the [recipe] for winning, especially with the team I have. If I didn’t have this team and I’m the only individual on this team, I could go out there and be top-three in the League in scoring—and go home early. It’s just not what I want.”

•It wasn’t just a simple dream-like epiphany that turned Wade into a wise 30-year-old, that turned him into a we-first instead of me-first player and person. It was, rather, the lowest moments of his life that helped him flip a 90, if not 180.

•Immediately after the summer of 2010, people tried qualifying the Heat as Lebron’s team or Dwyane’s team. For his part, Wade has never seen it that way.

“It’s not my team,” says Wade. “It’s not LeBron’s team; it’s not Chris Bosh’s team; it’s Micky Arison’s team, that’s whose team it is (laughs). We play on his team and we’re teammates together. We can’t win without each other. LeBron James can’t be LeBron James without me and the team and vice versa.”

Again, for the complete, actual DWade story be sure to pick up SLAM 164.

And as always, the cover story is just the tip of the iceberg. One of the most thorough issues in a while, in spite of Sandy keeping us out of the SLAM Dome for a week, SLAM 164 stars Michael Beasley (will he ever become the star he was once projected to be?), Gerald Green (who’s tired of talking about dunking), Jonas Jerebko (who apparently has haters in Sweden), Brandon Roy (who, despite the pain it causes him, loves the game too much to just give it up), Tony Mitchell (the best player in college you’ve never heard of), Allen Iverson (as popular as ever), Bobby Dandridge (old school!), Noah Vonleh (get familiar!) and much more.