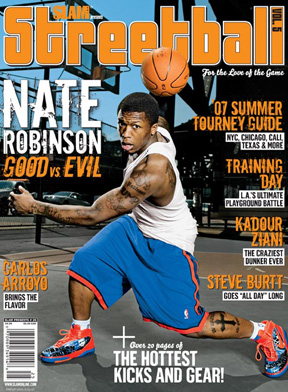 It’s hard to believe, even for me, but next week will drop the fifth edition of SLAM presents Streetball. We started it five years ago as a way to finally do some extensive streetball coverage; previously we’d been limited to doing just one story in here or there in SLAM. But as the And 1 Mixtape Tour grew in prominence, it became obvious that we needed more space for Streetball.

But after a few years, we realized we’d opened a can of worms. Basically, writing about streetball means writing a lot about the past, about the playground legends who played back in the day, from Joe Hammond to Hook Mitchell to Pee Wee Kirkland. And once we told all of their stories, what was left?

Well, we soon realized that streetball didn’t exactly mean playing basketball on an outdoor court: Streetball is a state of mind, an attitude. Streetball means breaking down your opponent in the most obvious and embarrassing way possible. Streetball means never being afraid.

And when it came time to figure out who should go on this year’s Streetball cover, we didn’t have to look very far. Ben, Khalid and I were sitting together at a Knicks game a few months ago when Nate Robinson checked in and immediately tried an ill-advised pass or shot, and suddenly it just clicked: Nate, welcome to your SLAM cover.

I’d spoken to Nate a few times in the locker room, but didn’t really have any relationship with him. Actually, I wasn’t much of a fan of his as a player — he shoots too much, he doesn’t pass enough, he shouldn’t have won the dunk contest. I wasn’t the only one critical of Nate, and yet Nate continued to play as though he was always the most important player on the court.

As we worked to set up the cover shoot, I got to know Nate pretty well, and once you spend time with him you’ll see he’s pretty hard not to like. The way he plays is the way he talks, the way he carries himself, always bubbling and shining. he’s made some strange plays, like when he tried to bounce an alley-oop to himself on a fastbreak with a defender right on his tail. I heard a story that during Nate’s rookie season, after a disappointing loss in Atlanta, Larry Brown kicked Nate off the team bus for shooting spitballs. I don’t know if that’s a true tale, but Nate’s still a kid and he’s still learning how the game (and life) works. Remember at the end of his rookie campaign when we spotted Nate playing pick-up ball at West 4th Street during the Knicks season? I grew up in Atlanta during the Spud Webb era, and even though Spud could famously dunk, he never played with the flair that Nate can’t seem to control. Which made Nate the perfect guy to fron SLAM presents Streetball.

A few weeks ago I took a car service up to Tarrytown, New York, which is where the Knicks have their practice facility. I arrived at 9:15 a.m., and there were only two cars out front of the place. One was a Range Rover, so I was thinking that might be Nate’s car, but then Isiah Thomas came jogging out of the building, ran up to the car and grabbed some papers out, then headed back in.

Nate showed up at 9:30 on the dot, and he piled in the car with me. Nate was going to leave from the shoot, so his buddy followed us in Nate’s car. As the car headed for Red Hook, Brooklyn, to the outdoor court we’d reserved for the day, Nate and I started talking.

Well, Nate started talking and I started listening. I’ve interviewed probably hundreds of athletes, and Nate’s probably the best talker I’ve ever heard. Much like his game, he just goes and goes and goes. I basically just hit record on the tape recorder and got out of Nate’s way. He had a lot to say. We let him say it. More on that in a second.

The other thing that’s impossible to miss about Nate is his size, or lack thereof. I dwarfed him. He’s built like a football player, nearly as wide as he is tall, and since he was a football star in high school and college (his freshman year) I guess his fearlessness makes sense.

After our photographer Atiba Jefferson shot a bunch of Nate dribbling and posing, we asked him to do some high flying for us, with the caveat that he didn’t really have to dunk as long as he could just jump a few times and get near the rim. Nate kind of hemmed and hawed and said he wasn’t really warmed up, and we were willing to let him go without doing any dunks, but within about five minutes he was launching himself at the rim over and over, making about as many dunk as he missed.

Anyway, there’s plenty from Nate in SLAM presents Streetball. But to give you a teaser for the weekend, here’s five of my favorite quotes from the Nate story:

5) “Basketball is my life, man. That’s what I bleed—if I cut myself basketballs would probably come out.”

4) “I just focus on trying to win the game and trying to make history, to do something spectacular so people will be talking about it forever.”

3) “That’s why Isiah’s so hard on me, and I tell him, Don’t change, keep being hard on me, because you’re going to bring the best out of me.”

2) “My Dad was a running back at the University or Washington. He was the first person to win the Rose Bowl and Orange Bowl MVP, and nobody’s broke that record yet. My Dad’s the only Dad in the world to have that record.”

1) “When I’m playing basketball, it’s like I got a little devil on one shoulder and a little angel on one shoulder, and the Devil’s like, ‘Go ahead and bounce it and throw it off the glass!’ And the angel’s like, ‘Now Nate, you know if you do this…’ That’s how it is sometimes. Like Kobe said, It’s like Babe Ruth: You swing big. You might miss, but if you hit it it’s going to be a home run. So you can’t hold back, man. Anything can happen.”