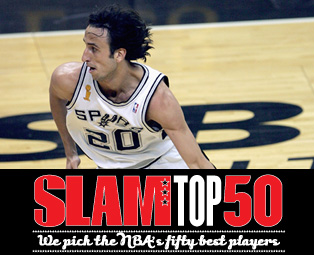 While everybody keeps talking like Dirk and Nash are the frontrunners of the international revolution do not, under any reliable circumstances, sleep on Manu Ginobili. The only real weakness in his game is that he’s occasionally erratic but that’s really only if you’re nitpicking. He’s a high-energy player and sometimes takes risks but when has anything he done resulted in the Spurs losing a big game? Yeah that’s what I thought. And of course there are those who hate on his flopping technique like he’s the only dude in the L who does it. People aren’t mad that flopping as an entity exists only that he’s so good at it? Is that what it is? I’m correct aren’t I? That’s nonsense. Flopping is like a state representative with an inappropriate relationship with a congressional page. We accept it but we turn our heads away unless it’s really, really obvious. So if that’s all you can say about Manu that’s fine.

Because remember he plays tough defense, will drive on anyone, will bang it on anyone, will hit clutch three’s, gets timely steals and rebounds and doesn’t even worry whether or not he starts or plays as many minutes as he should. I used to joke around the office that if Manu were black he would have gotten his own cover by now. Pop is a top tier coach and he feels like he has to Manu in sometimes but he also lets him go because he knows that quiet as its kept as his position he’s top 5. Think I’m playing think about it. Count it down. Kobe and Wade are obviously better than him but after that then what? Remember Manu has rings and yeah they have Duncan and a great bunch of players down in the S.A but without him I really feel that they would be one championship short. Manu is nasty and probably should be higher on this list but you’ll have to talk to someone else about that.