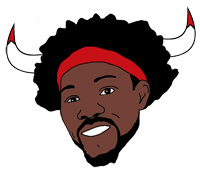 By Natalie Sitto of Need4Sheed.com

For a non-drafted player from a small school like Virginia Union University, Big Ben Wallace has done big things. Wallace turned himself into an All Star on drive, determination and athletic ability alone. When Wallace came to Detroit in a deal that sent Grant Hill to the Magic, he was merely a name that was thrown in to get the deal done. Who knew that his hard work, and defensive abilities would turn him into the face of Detroit’s franchise and lead them to a NBA Championship. Now Ben takes his grit and leadership abilities to a young and talented Bulls team to see if he can replicate his winning ways and maybe add another ring to his finger.

Sure the man can’t hit free throws but that’s not what he’s on the court to do. Ben Wallace has built his entire career on hard work and there are 60 million reasons why it’s paid off for him. This four time defensive player of the year brings more to his team than just blocked shots and rebounds. Ben Wallace does something that very few players in this league can do, he can change the course of a game without ever touching the ball. His mere presence on court can force any offense into making quick adjustments to avoid that big body in the paint. If that wasn’t enough his best asset is his ability to make that always timely defensive stop that changes the momentum of the game in his teams favor.

Some say Chicago overpaid for Wallace and that he’s on the downside of his career. Only time will tell how Ben’s going to fare in The Windy City but I have a feeling his Fro is going to hold up quite well.