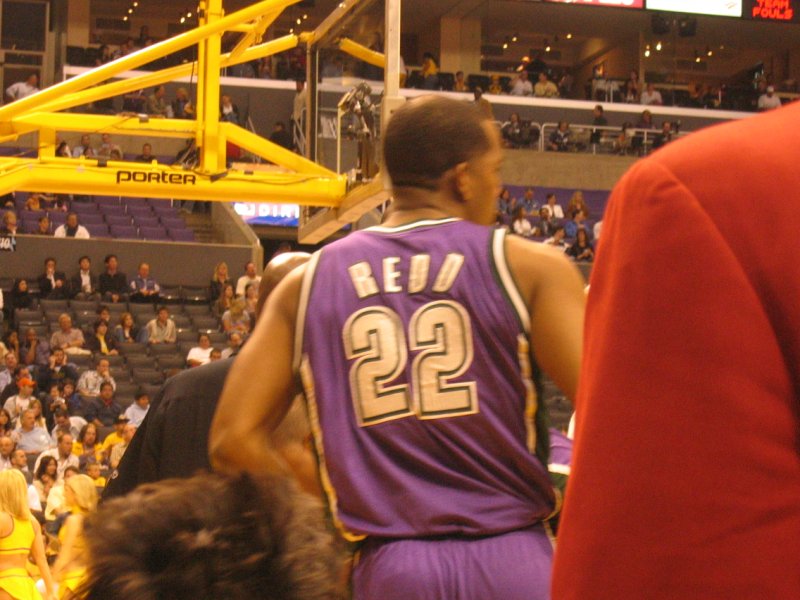 Michael Redd is one of the few top-tier guys in the whole league who still doesn’t have a cool nickname. Answers.com claims that he carries the moniker of “Redd Hot” which is simply awful, and sounds like something that was made up by an uninspired Bucks play-by-play guy. We need this corrected ASAP.

Redd, as you all know, has one of the quickest releases on the planet; dude’s shot looks it’s being launched by a space-age catapult. The release of his jumpshot is so quick that it’s hard to imagine that he ever gets a good look at the rim before firing away—yet, he remains one of the purest gunners in the Association.Michael is also one of the nicest guys in the NBA; you rarely (if ever) hear a negative thing said about him from teammates and opponents alike, and the kid bought his dad a church for crying out loud! I can’t think of a more awesome present.

Last season he posted career highs in points per game (25.4) and free throw percentage (87.7)–making him the 9th most prolific scorer in the NBA.

The Milwaukee Bucks are also a team on the rise; having made the playoffs last season (before bowing out to the Pistons in 5 first-round games), with Redd playing admirably (averaging 27.2 points on 52.4% shooting from the field), the future looks bright in Wisconsin. Andrew Bogut can only get better, and now with the addition of Charlie Villanueva (who was stolen from Toronto for TJ Ford(!) in one of the most lopsided trades in recent memory; but that’s neither here nor there), Redd should keep piling up the points as teams will have a harder time doubling him consistently, and if there’s any justice in the world, he will be an All-Star in the Eastern Conference for as long as he wants it.It’s important to note that Michael Redd is about to enter his 7th season as a pro, and at the age of 27, he is about to hit his prime. That’s a scary thought for Bucks opponents.

Areas of improvement: Defense (you won’t be seeing his name on any All-Defense team anytime soon); passing (he averages a measly two assists per game for his career); bald spot (that thing bugs me for some reason).