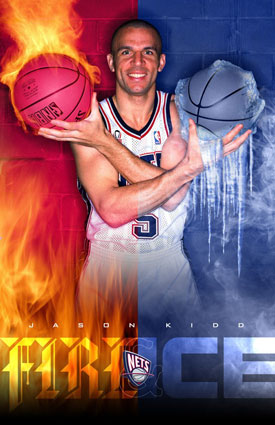 My jaw dropped. I stared at the TV in disbelief. And then I giggled like a little schoolgirl.

Basketball is basketball and bowling is bowling, but Jason Kidd had just bowled a basketball to Kerry Kittles. If my memory serves me right, Kittles had leaked out on the break and was doing his typical warp speed gazelle impersonation when Kidd rolled an orange bowling ball between two New York Knicks, knocking down a few imaginary pins in the process. The pass hit Kittles in stride and he slammed it home. Kidd put a spin on the ball that only a genius could summon in such short notice.

In lieu of dozens of other stories like this, let’s take a look at Kidd’s five year tenure in Jersey. (Note: Kidd’s number is this high on the list because of microfracture knee surgery and the aging process. Anything less than a look back at his first five transcendent years with the Nets would be insulting.)

–Five straight trips to the playoffs.

–Three straight conference finals appearances. Interesting and often forgotten tidbit: Had Kidd not been hobbling around against Detroit in ’04, the Nets would not have lost game 6 at home and the Pistons never would have won a title. Actually, a series against those bickering Lakers might have been Jersey’s best shot.

–The 2001-02 MVP award. The league gave it to Tim Duncan but Kidd was robbed. If Nash gets these two, Kidd gets that one. Duncan may have averaged 25 and 12 that year, but the Spurs were outclassed by both the Lakers and the Kings. Kidd, like Nash does now, had an indisputable, overriding influence on the way the game was played while bettering his teammates. And he played defense well enough to make the All-NBA first team that season. He was the 01-02 MVP. Worst case scenario, they could have shared it. Actually, that would have been fitting.

–The most annoying greatest PA call of this decade: JASONKIDD!

–The complete revitalization of the New Jersey Nets. Prior to Kidd’s arrival in Joisey, people compared the Nets’ sale of Julius Erving with the Boston Red Sox selling Babe Ruth. People believed in their hearts that this team was cursed.

–The art of the fastbreak: My favorite thing when watching Kidd is the way his eyes light up immediately after he grabs a carom and heads up court. The way opposing defenses stumble while trying to get back—because they know what’s coming and how fast it will hit them—is to understand the advantage of the fast break.

–Kidd has consistently shown an insatiable will to win since he landed in Jersey. Though a playmaker by trade, he blew Net fans away immediately with his ability to bury clutch 3’s and get to the line during crunchtime—often while converting and1’s on fearless forays to the rim.

–If you watch soccer, you’ve probably heard an announcer refer to a great pass as having the perfect “weight” on it. There is no NBA player with better weight on his passes than J-Kidd. Not only does he have eyes in the back of his head and the vision of Nostradamus, he combines impeccable timing with an innate understanding of physics.

Playmaking is an art form, and Jason Kidd is the swamp’s Michelangelo. That said, Kenyon Martin, Richard Jefferson and Vince Carter have teamed up with Kidd over the past 5 years to paint one hell of a ceiling.