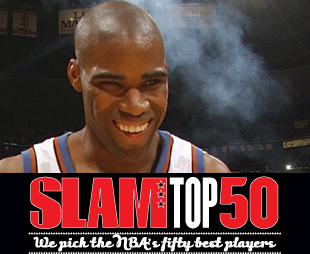 For a guy that was the best player in the nation on one of the highest profile college teams, then came to the league and put up numbers every year, Antawn really flies under the radar. He put up big numbers on some bad Golden State teams, sacrificed his numbers to play for a good Dallas team, and now has settled into the role of putting up a near 20 and 10 as the second best player on the Wizards. Since 2001, he’s played all 82 games every single year, with the exception of the ’04-’05 season, which ironically was the only time he was named to the All-Star team.

His game is hard to describe. He’s a big guy who gets rebounds and scores inside, but he takes and makes alot of threes. He’s never played for a team that stresses defense (that’s an understatement!), and his numbers probably get a boost from the Eddie Jordan system, but you can’t deny that he’s one of the top second bananas in the game. A franchise player? Probably not, but he’s still got a high value to his team.

Antawn also has the rep of being a really nice guy, which tends to stick NBA players the dreaded “soft” label. I prefer to call him a finesse player. But the numbers say that he’s a near 20-10 guy on a team that’s been to the playoffs for two years in a row and should keep going back. Those are rare, and therefore valuable.