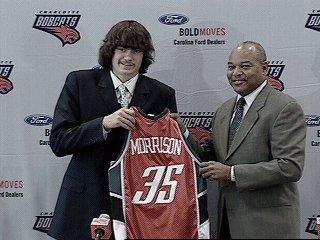 The Bobcats are searching for something… Something to add that extra spark to the team, that extra flare on the court. And they think they’ve found it in the 3rd overall pick in the NBA Draft.

Adam Morrison was explosive in his college career, and he looks promising for NBA play. In the summer league, he averaged 24.6 points and 2.6 rebounds with an average of 29 minutes per game.
So what does this mean for the Bobcats? Morrison will finally bring an energy to the court that will compliment Raymond Felton and Gerald Wallace. He will bring an intensity to the game that the Bobcats are missing. He will draw out emotion that the team is lacking. Recall Gonazaga’s first NCAA Tournament game against Xavier. Gonzaga fell behind early in the second half and struggled to regain control. Two of their starters fouled out, which left Morrison and Batista to lead the way. And they did.

They were the only two that night in double figures. Morrison himself clinched the lead by hitting a 3 with 1:58 to go, and then making 2 clutch free-throws with 19 seconds left. Right after the free-throws, Adam slammed the ball into his head 3 times screaming at nothing and no one. That’s the emotion I’m talking about. When he really gets into a game, you can see it in his eyes, he is so intense. He channels it and explodes on the court to rally his team behind him and win games.
There is so much talent on the Bobcats team, so much potential, but no one is driving it. No one is feeding the fire or bringing emotion, everyone on the court and sidelines last year was stone-faced for the majority of the season. Adam Morrison will change that. He will light a fire under everyone, get everyone riled up and ready to play. He will bring the emotion that is lacking and leave everything on the court.

Should we worry about his points or defensive capabilities? Nope. Why? Because he’s talented enough to do what he needs to do, and he makes everyone around him better which will make up for anything he misses. I think they’ve found their spark.