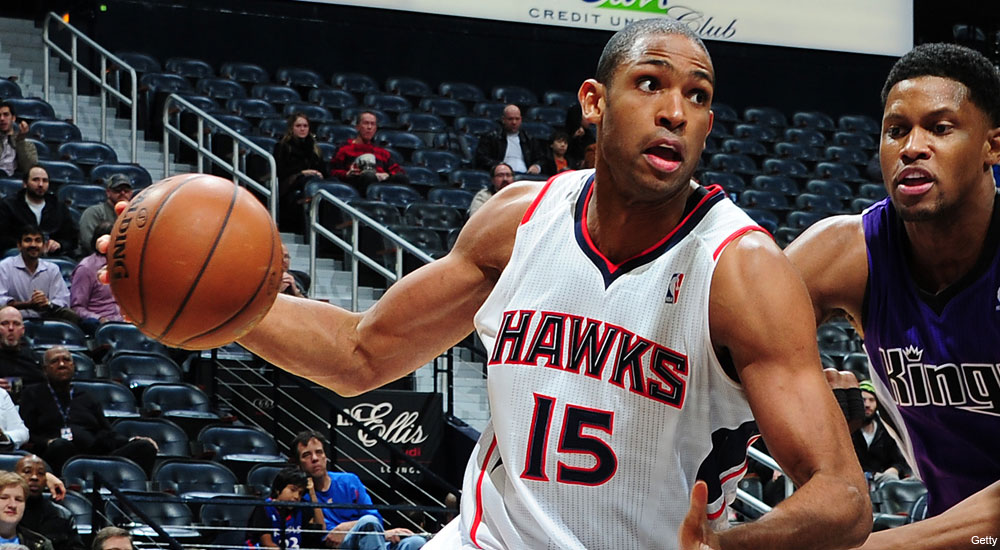 When the proverbial shih hit the fan in the Hawks’ front office this summer, it overshadowed everything that seemed like a step in the right direction: hiring coach Mike Budenholzer, landing power forward Adreian Payne in the Draft, and the addition of Elton Brand, Thabo Sefolosha and Kent Bazemore in the offseason.

Budenholzer was busted on a DUI last year at around the same time that Hawks ownership was dissolved and general management was sequestered. This only adds uncertainty to the return of Al Horford—who’s recovering from a season-ending pectoral injury and hasn’t yet been cleared for contact as training camp begins.

The Atlanta Hawks were three games above average when Horford went down last December, his second chest injury in three years, but the team finished below .500 without him and still made the Playoffs as a long-shot, nearly out-running the Indiana Pacers in the first round.

At the time of his injury, Horford was leading his team with 19 points, 8 rebounds and 2 blocks in the 29 games he played and his .588 true shooting percentage was a career high that provided glimpses of how the Dominican powerhouse fits into Budenholzer’s dynamic and highly nuanced offensive system. The second-year coach cut his teeth in San Antonio and his offense is geared toward creating space for the open scoring opportunities that come off pick and rolls and pops as well as in transition, where Horford’s agility gives him a decided advantage over many of his opponents.

Despite his injuries, Horford has worked hard at extending his shooting range and can now spot up on the elbow like Tim Duncan and hit open mid-range shots that would come off the hand-offs, pin-downs and side screens of Budenholzer’s schemes.

The extension of range gives Horford more leverage on isolations, but for him to be effective like Duncan in the new system he needs to develop his post game even more. He’s great at shaking his opponent with the pump fake, but when that doesn’t work he lacks the secondary counter moves of the Big Fundamental.

Horford’s good on pick and pops, but he could use some more work on his pick and roll. He has the pedigree of a champion—and as such, the will and determination of an elite competitor—so he’ll get better without a doubt because Budenholzer’s multifarious system works. It worked in the Playoffs against the Pacers and it ultimately won the chip against Miami, but it remains to be seen how effectively it works from within and changes the culture of an underachieving organization that’s rotted to the core.

The Hawks got lucky at the end of last season, but this season they’ll have no such luck even if Horford is back at a hundred now that Charlotte and Washington have emerged and Chicago and Cleveland are favorites. Budenholzer, who’s in the driver’s seat, said Horford’s made great strides in his recovery over the summer and is nearly back to full strength and will be ready to go opening night. He’ll be in training camp but not participating in full-on contact as a precaution, but he’ll be ready to go.