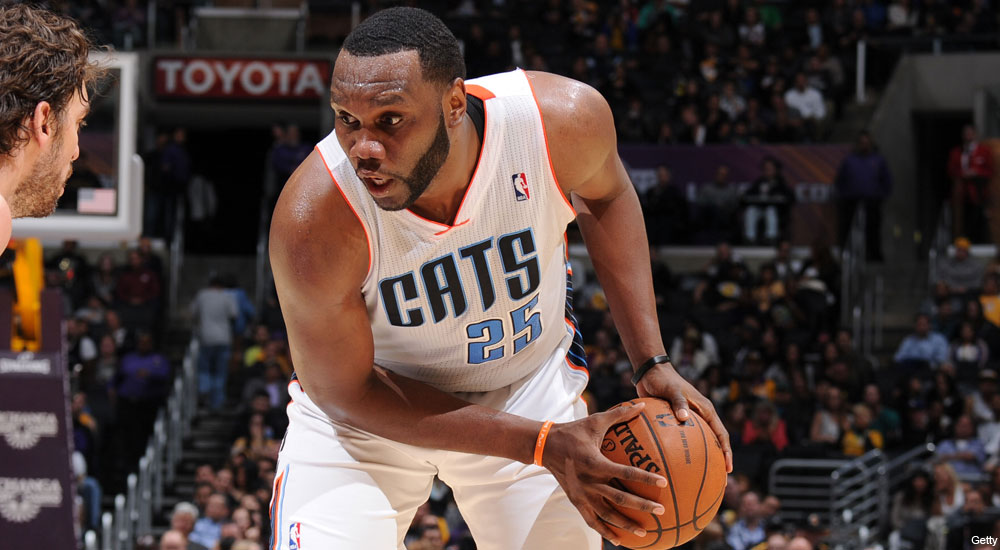 The NBA is filled with big men who run fast, jump high, and shoot from far away from the basket. Al Jefferson is not a part of that era. Big Al is a throwback big man in a league of power forwards and centers who are stretching the floor to its limits.

Through his career, Jefferson has earned the title “professor” from his many admirers for the way he’s turned the block into his classroom. Specifically, the left block, where Jefferson sets up on seemingly every possession for Charlotte. Big Al doesn’t run many pick-and-roll plays, and he’s effective with the short jumper, but the post is where he earns his money, with moves and countermoves that even the most old school would approve of. Spins, quick hooks, up-and-unders. Jefferson has it all down low.

The contract Jefferson signed to come to Charlotte a year ago was lampooned at the time, a three-year, $41 million deal to be the centerpiece. Instead of putting up huge numbers on an awful team, Jefferson made himself worth every penny of his deal and was in the center of the Bobcats, now the Hornets, rising to respectability in the Eastern Conference. It was the perfect confluence of circumstances: a franchise in need of a fulcrum, a coach able to maximize the talent on hand and a star player reaching the prime of his career.

It didn’t surprise many that Jefferson put up 21.8 points and 10.8 rebounds a night in 2014, though All-NBA honors were a little unexpected. It was easy to assume that his stats would be empty, coming for a bottom-dwelling team. No one expected Charlotte would turn into a frisky playoff team in the East, making a run from the bottom of the conference in the early days of the season to the No. 7 spot. The team gelled around Jefferson as the season went on, with point guard Kemba Walker coming into his own as a solid secondary option. The Cats seemed poised to give the Heat at least a headache in the first round, with their solid team defense and no answer for Jefferson down low.

Injuries happen, though, and for Jefferson they happened at the wrong time. Al tore his plantar fascia in Game 1 against Miami after torching them to start the game. It was painful watching him gut through the foot injury for the next two and a half games. Still, he put up double-doubles in the first two games and scored 20 in Game 3 before he just couldn’t go any farther. Even though he led the Bobcats on an uphill climb to reach the postseason, they couldn’t ride on a bum wheel.

Now called the Hornets, Charlotte loaded up around Big Al this summer, signing Lance Stephenson and a handful of veterans and drafting Noah Vonleh and PJ Hairston. They look ready to challenge for bigger and better things in the East. Jefferson is ready for it, and he’s certainly not satisfied with the new heights he led his franchise to last spring.

For all his brilliance on the block, Jefferson is not a good defender. He’s not fleet enough to stay in front of guys, he doesn’t jump high enough to protect the rim. Jefferson’s deficiencies are one of the reasons his signing was knocked, and it’s one of the reasons Charlotte’s first-time head coach Steve Clifford was lauded for building a top-10 defense around him. Jefferson knows it, too, and he wants to change that perception of himself.

“I refuse to continue getting picked on at the end of games. It’s not fun,” Jefferson told the Charlotte Observer. “I’d pick on me too. So I want to take the challenge to get better at that so it’s not an option they always go to.”

Leave it to a professor to put it in such simple terms.

One of the keys to self-improvement is knowing you need to improve, and Jefferson is past that stage. Clifford has told the media of his big man’s progress on that end of the court. Jefferson, just like the Hornets as an organization, wants and expects more in this first year of teal and purple. For the first time since basketball came back to the Tar Heel state, this franchise is on the upswing. The taste of success they got in the first round back in May isn’t going to suffice. The Hornets beefed up with youth, with veterans and added the some of the sickest jerseys in the League to their arsenal. In a conference that looks as evened-out as ever.

Al Jefferson will be there powering the Hornets in the Hive, holding class down there on the post.