A unique talent with sky-high potential, Drummond is due to make another jump this season. 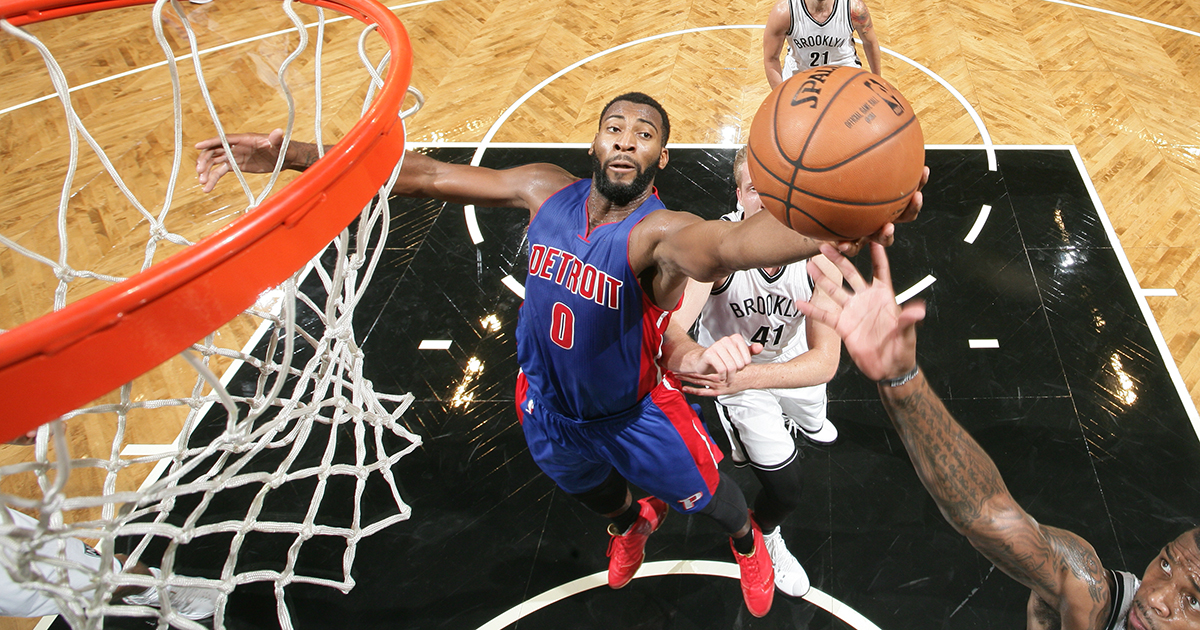 Before we begin, I’d just like to take a moment to point out that it’s taking every bone in my body to pen this write-up objectively about the sport of basketball, rather than spending the bulk of my allotted word count arguing that Drummond’s deserving of something more like a top-10 ranking off personality alone. Dude is cool as shit. But oh right, basketball talent and skills and all that…

OK fine I’ll just tell you, he’s 23. Young enough that a few players older than Drummond were selected in the 2016 NBA Draft. I mean, the guy is literally still wearing braces. His age has a lot to do with why in July, Drummond inked a five-year, $130 million contract with the Pistons.

Youth though, in this case, isn’t an excuse to wait any longer on his potential—as it is for others in his rearview on our Top 50 list this year. Just the opposite, in fact—it points to him taking another gigantic leap in 2016-17, as he did last season.

Consider: when Drummond’s giant new deal with Detroit expires, he’ll be 28. Hassan Whiteside is, right now, 27. If Drummond’s career were a swimming pool, he’s just about to dip his toes into his prime.

Metaphorical bodies of water aside, physically, Drummond is nothing short of a savage. After being listed at 6-11, 279 pounds in 2015-16, he claims to have lost 20 pounds this summer, which would in theory make him quicker to get up for rebounds—as if he doesn’t gobble up enough already—and faster in the open court, where he likes to catch lobs for easy buckets.

Last year, Drummond averaged 16.2 points (career-high) on 52 percent shooting, a League-best 14.8 rebounds (also a career-high), 1.4 blocks and 1.5 steals in a career-high 33 minutes per game over 81 starts. And the Pistons made the postseason for the first time since 2009 (when Drummond was all of 16 years old).

Perhaps you got bored somewhere in the middle of that very stat-heavy graf above, so let’s try again: The man averaged 15 boards a game. (For whatever it’s worth, Kevin Garnett led the NBA in rebounding for four straight seasons in the mid-2000s while never eclipsing 14 rpg.) If you woke up one morning last season and Drummond didn’t have a double-double the night before, you had to do a “WTF?” double-take. In his preseason debut last night, Drummond pulled down 21 rebounds, 11 of them on the offensive end, in 24 minutes against the Nets (he had 17 points, too).

It doesn’t take a basketball savant to pick up on Drummond’s weaknesses. The statistics suggest that on the defensive end, he doesn’t protect the rim like a Dwight Howard. On the other end, the eye-test would tell you he often doesn’t roll to the rim quite like a DeAndre Jordan. And yes, his 38 percent career free-throw shooting is dreadful. DREADFUL. SO, SO BAD. (Although he’s been working on his foul shooting this summer with the aid of a virtual reality simulator. Seriously.)

But check out his wide-ranging top-10 plays from last season real quick:

They begin with him taking a pretty damn good defender in Tristan Thompson off the dribble with a crossover and pretty finish. There are dunks, hustle plays, blocks… Admittedly, there’s not a lot of aesthetic beauty to it all. But that may come, and for now Drummond can rely on outmuscling opponents to easy buckets and oodles of rebounds. Ranking him at No. 22 is an optimistic projection, perhaps, but unless he spent the summer eating donuts and hanging out by the pool and added absolutely nothing to his post game, he should easily produce numbers to back it up.

He’s already promised to lead the NBA in rebounding once again, and as the franchise center in Detroit, a return trip to the All-Star Game seems inevitable. *Whispers* Hey Pistons fans, it’s not a perfect comparison, but Dwight’s 23-year-old season, he led the Magic to the NBA Finals. JUST SAYING.