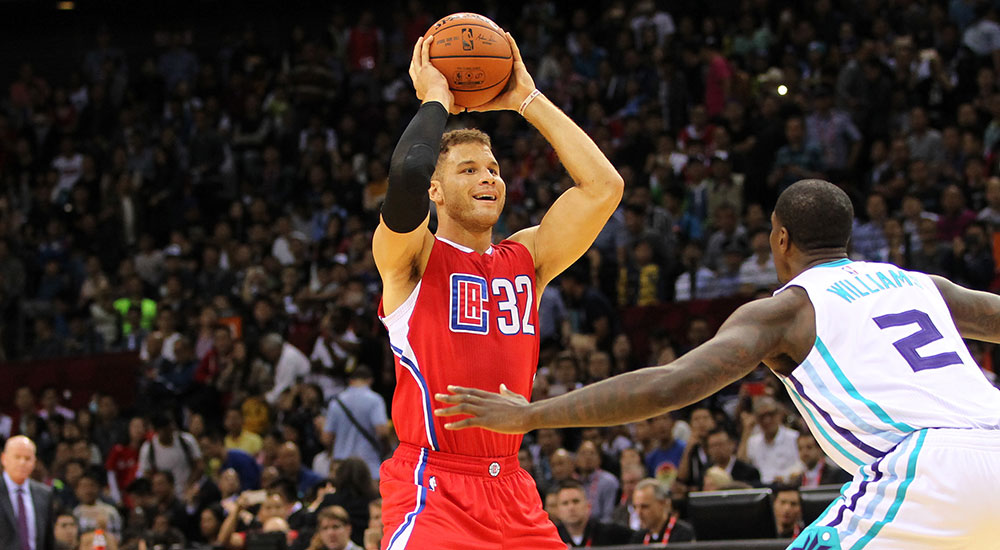 Once touted as a high flyer who excelled at spectacular dunks, Blake Griffin is now a proven, all-around frontcourt player.

Lob City is still his game, but with the development of a mid-range jumper and his ability to pass out of double-teams for the assist, his game has become excruciatingly complete. Chris Paul is the engine that runs the mighty mighty Paper Clips’ offense, but Griffin is the catalyst. When he’s pumping on all cylinders the Clips are like a finely tuned 428 Cobra Jet.

Averaging close to a double-double for his career, Blake’s numbers came in at 21.9 points per game, 7.6 rebounds per game, 5.3 assists last season. He shot 50.2 percent from the field while improving his free-throw percentage to 72.8, the best of his career.

Although his rebounds dipped, due to DeAndre Jordan playing way above the rim and posting monster rebound numbers, Blake’s assist total jumped. His shooting percentage stayed in the right range, even though he was shooting the top of the key jumper more.

You can’t dunk it every time, but Blake’s still an open-court beast. A threat to run the lane and finish off a fast break with a thunderous, rim-rattling dunk that will bring the house down, especially when he’s in the Staple Center.

With Blake on one side, DeAndre on the other and Paul Pierce and JJ Redick posting up for threes, CP3 will have a bevy of scoring options when he’s emulating the Showtime Era Lakers game that the Clips play best. But when the game slows down, give Blake the ball and let him do his best Karl Malone impression. With the outside jumper falling he’s a true inside-outside dual threat.

Blake is turning into more of a facilitator now. He has always been a kind of point forward in a way, but when CP3 was out in 2013-14 he proved he could be the playmaker the high-octane Clips offense needed. Just entering his prime, Blake will be a regular on the shortlist of MVP candidates for the next several years.

With the additions the Clips have made in the offseason, the sixth-year Oklahoma standout should stay well-rested this year. With Josh Smith to back him up and Jordan back in the fold, keeping Blake at his natural 4, it’s all about gearing up for the Playoff push.

The last couple of years Blake’s been tired by Playoff time, and in some of the more important games, he’s faded at the end. He still averaged 25.5 points, 12.7 rebounds and 6.1 assists in the Playoffs last year, but he’s faced criticism for disappearing in the fourth quarter. This year, we should see a fresh and determined Blake, ready to lead the Clips to a chip.

Those numbers show what Blake is truly capable of as a player. Dominant numbers from a high-flying athlete who can play defense. Never known as a defensive stopper, more a shot-blocker really, Blake must take his whole game to the next level come spring. Because that’s when champions are born. The Clips have the best squad they’ve ever had, but if they don’t win in prime time, it doesn’t matter.

It’s all on Blake and the Clips now. He can be remembered as a superstar power forward who never won a chip, a la Charles Barkley and Karl Malone. Or he can step his game up and let the victories do the talking. The ability is there. Now it’s time to do the heavy lifting. The factors that separate a Michael Jordan from the rest of the talented players is that will to win. That will to put in the hard work and effort that it takes to get to the pinnacle.

I believe in Blake Griffin. I am a long-suffering Clippers fan. I believe he can take the Clips to the promise land. I believe he has the team around him to do it. I believe this is the Clips’ year. With Paul Pierce, Lance Stephenson and Josh Smith adding to the core they are loaded with talent.

Now it’s time for Blake Griffin to play and bring that Championship home because that’s what the best players do. They win. With his lofty position as a top-10 player, it’s time for Griffin to back up the ranking. Enough said.