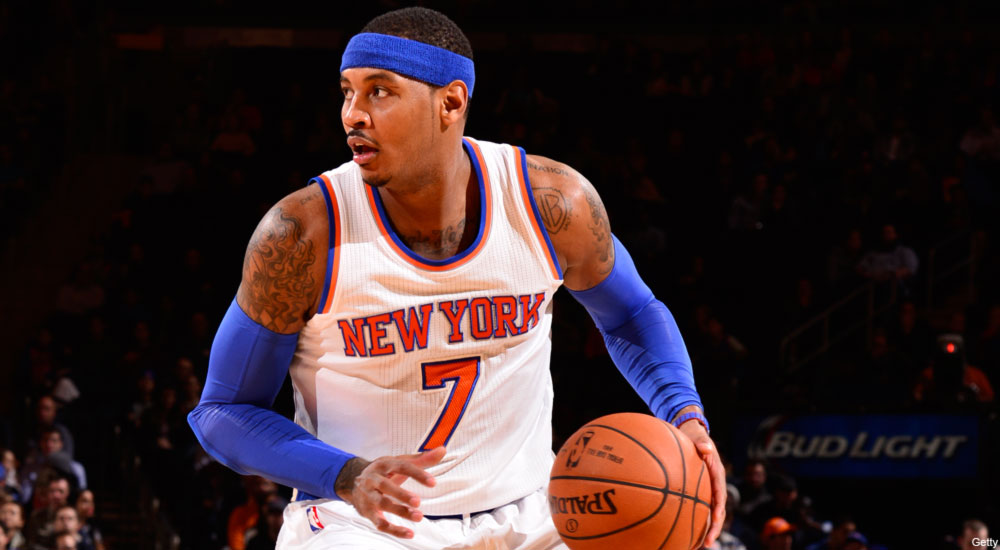 First thing’s first: I put Carmelo Anthony fifth on my list. So I could come in here all angry about he’s way down at 7. And, after all, I wouldn’t be the first person to call Melo underrated. But whatever; fifth, seventh, the point is this guy is in the conversation as one of the handful of best basketball players in the world, and if you argue that point, I’m afraid you don’t know the game.

Let’s start with the scoring: Melo averaged 27.4 ppg last year, after 28.7 the year before, and his career average is a robust 25.3 ppg. You get the point. In a sport where the goal is to out-score the opponent, Carmelo Anthony has been one of the best in his business for 11 straight seasons.

Continue with some “advanced” stats: Melo’s PER was 24.5 last year, good for ninth in the NBA. (His true shooting percentage ranked a much less-impressive 101st, but those numbers are crunched tight and everyone knows he takes about two or three horrible shots every single game; probably his biggest drawback as a player).

His defense and rebounding skills aren’t terribly respected, but Melo quietly averaged a career-high 8.1 rpg last season, and even if he’s not going to stop LeBron or KD one-on-one, who can? He plays good team defense and knows how to get in the best position to rebound because he knows the game extremely well. You don’t want to look at either of these as positives to Carmelo’s game? Well I’m not going to call them negatives.

He can—and should, in my opinion—pass a little more. He gets to have the ball in his hands a ton, and with defenses as keyed on him in those situations as they are, Melo should be able to get close to 5 apg. But, like with his relative lack of winning, Melo has rarely had the type of teammates any superstar would want to pass to.

As for that relative lack of winning, it ain’t like this guy’s been in the Lottery every year. On the contrary, last season was the first time ever he did not make the Playoffs. And he’s been the best player on his team every single one of those seasons. In 2009, Melo’s Nuggets coalesced at the right time and he and Chauncey Billups pushed them all the way to the Western Conference finals. In 2013, when he was at the peak of his scoring powers, he was the leader of a fun-to-watch Mike Woodson bunch that won 54 games and lost a closer-than-it-sounds second-round playoff series, 4-2, to the very tough Pacers. Other than that, he’s lost a lot of first-round series. Impressive? Not exactly. But again, it’s not like this guy’s mailing it in for 82 games; he’s grinding every night to insure that his team (which, so far, has always been one with middling NBA talent), at least advances to the postseason.

He also won a National Championship in his one year and college and stood toe-to-toe with Kobe Bryant and LeBron James as a go-to scorer on the US Olympic teams in 2008 and 2012. So calling this guy a loser is patently stupid.

Could he do more to make averagely talented teammates better? Probably, especially if it just meant looking for them on offense a little more. Could he present a public persona that paints him as harder-working? Perhaps, but here in the hyper glare of NY, I think his nonchalance is kind of smart. Give off too much intensity and you’re just asking for more press to hound you.

Look at his Jordan Brand and fellow New York athlete Derek Jeter. Jeets has always been boring as shit with the press; maybe his hustle show through on the field a little more than Melo’s, but the biggest difference is that Jeter won five rings, largely thanks to the incredible teammates he had.

What’s cool and intriguing about the Carmelo story, particularly this season, is that we may yet see a slightly refined player. Oh, the Knicks roster is pretty mediocre (in our season preview issue, which drops next week, I peg them for the ultimate mediocrity with a 41-41 record), but the Phil Jackson-Derek Fisher braintrust will be pushing a new brand of basketball on Carmelo. Phil’s the guy that got the best out of Michael Jordan and Kobe Bryant; why won’t he get the best out of Melo?

Lastly, since even if our rankings our collective, each write-up is decidedly personal. I wrote the cover story on Melo when he met us on a nearby rooftop and posed with his Gold medals with the Empire State Building in the background. He was cool as shit that day. He’s been good to SLAM as long as he’s been playing basketball. I was at the 62-point game. Only the most points any player ever scored at MSG—and they’ve all played there. I’m a human being. So, he snubbed you for an autograph or you hate the Knicks, and these biases make you think he’s the ninth-best player in the League? I like the guy so I think he’s the fifth? As a whole, we split the difference and placed him at seventh. This is nothing to sneeze at, people.