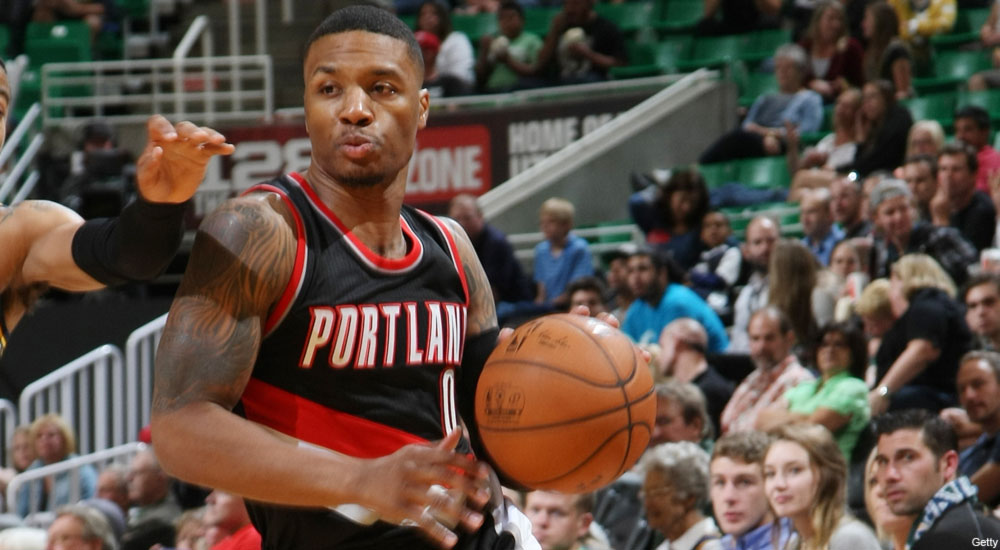 Stardom has come quickly for Blazers franchise point guard Damian Lillard. Just two summers removed from hearing his name called at the NBA Draft, the 24-year-old has been climbing the league ranks since the moment he first stepped on to the pro hardwood, quickly amassing a slew of accolades and honors along the way.

His on-court resume is already extensively comprehensive: Summer League MVP; rookie record for most made three-point field goals; unanimous Rookie of the Year (only the fourth player to do so). In just his second season, not only was he named to the All-Star team, but he also became the first player to ever compete in all five of the League’s All-Star Weekend showcase events. An All-NBA Third-Team nod soon followed, as he led the Blazers back to the Playoffs and into the second round for the first time since the 2000 season. His series-clinching buzzer-beater in the opening round against the Houston Rockets has defined his career to this point.

His off-court endorsements and obligations, with the help of both his play and his reps at Goodwin Sports, have been ramping up at an equally rapid pace: He has a featured role at adidas Basketball as headliner for the new Crazy Light Boost, with a signature shoe on the way. He landed a spot on the cover of the new NBA Live 2015 video game and a cameo in Madden NFL ’15’s overly grandiose commercial. He’s got local deals with Moda Health and Hannah Motors, with at least three more deals that’ll soon be announced.

His #4BarFriday Instagram movement is steadily growing, and he’s also a Special Olympics ambassador and the face of the “Respect” anti-bullying campaign. The weekend before Portland’s training camp, he spent his own money to host free clinics for Special Olympics of Oregon and Self Enhancement.

For even the game’s biggest stars, who’ve over a decade in the League seemed to balance both the on- and off-the-court game, that’s quite a lot.

What’s gotten Damian Lillard to this point though, and what makes his trajectory toward being one of the League’s very best guards a foregone conclusion, is that he hasn’t let any of the accolades or obligations weigh him down. He’s still got the same chip on his shoulder that helped him rise from an unknown and unranked Oakland high school player to a college scholarship, to ultimately being the sixth pick in the Draft out of small conference Weber State University.

“Nothing gets in the way of basketball for Damian,” Blazers GM Neil Olshey confidently says. He’s not remotely worried about any of Lillard’s newfound fame becoming a distraction for him.

Even though he’s already surpassed all expectations thus far, Lillard still likes to dig for slights, look for areas to improve and keep a keen eye ahead on simply winning. Not making this summer’s USA Team for the FIBA World Cup, as the very last cut, hit no player harder.

This is team USA letting me go. My head up, spirits up, and I'm going back to work. #TeamAdidas #JustGetBetter #WoodOnTheFire

“It was them telling me that I wasn’t good enough,” Lillard flatly said at Blazers media day. “I’ve always been one to throw wood on the fire any time I got the opportunity. Once I was turned away from making that team, I basically took it as, ‘You’re not good enough.’ That was just another reason for me to go back and keep trying to improve as a player.”

Back in my natural habitat! Throw more wood on the fire . Thankful for the opportunity And guys please don't feel sorry. I'm always Good!

He’s put up averages of 20 points, 6 assists and 3 rebounds per game in his first two seasons—while playing in all 164 games—but he hasn’t let the successes linger. He’s learned to enjoy the moment, quickly move on, and focus on the weaknesses that he can still correct. After nailing the cold-blooded three-pointer at the buzzer that instantly ended Houston’s playoff aspirations, Lillard joked about reading some of the comments on Twitter that night, got a good laugh out of watching this reaction video from Rockets fans, and then was on his way to prepping for the second round against San Antonio.

As he soon quickly learned, the League’s leaps of highs and lows can be a roller coaster. He went from feeling on top of the world after hitting “The Shot,” to seeing firsthand just how tough the journey can be, as the Blazers were admittedly dominated by the Spurs in a quick five-game series. “We got a taste of winning in the postseason, and then we got a taste of what it took to be a Champion,” he sighs.

While his summer travels had him bouncing around from L.A. to Portland to Ogden, UT, to Las Vegas, home to Oakland and even to Manila, that second-round playoff exit and the eventual rejection from Team USA fueled his fire all offseason. He re-watched the entire second-round series—twice—and made sharp changes to both his summer workouts and his diet as a result.

Already known for his relentless work ethic and grinding gym workouts that helped him rise to the top of the 2012 Draft boards, he added even more emphasis on strengthening his lower body this summer. “I think last year, I ran out of gas,” Dame admits. “My legs were really tired in that San Antonio series.”

He’s also looking to use that added strength to overcome two of the last remaining criticisms of his poised and near-polished play: his defense and finishing more accurately around the basket. There were noted improvements in his post defense in just one year during his second season, but it’s his pick-and-roll defense where teams look to most exploit him. He’s still learning how to get positioned just right when fighting over screens on the ball handler, and as teams more closely scouted him as a sophomore, they specifically ran an average of 2 additional pick-and-roll sets against him per 36 minutes.

During the Spurs series, Tony Parker used a repeated series of both high and wing pick-and-rolls, with Tim Duncan and Tiago Splitter often catching Lillard to free TP for a barrage of mid-range jumpers and floaters in the key. Lillard has certainly seen the film enough, and he’s hoping that the added leg work can help him explode up and around screens quicker, rather than fighting directly to the side of a screen and getting caught as his man dribbles on by.

The avid Wing Stop and Benihana fan has also committed himself to entirely revamping his diet, which is impressive because those places are both amazing. He’s completely ditched fast food. No more soda. No salt. The only sugar he gets is from fruits. After 90 days of sticking to the strict diet and even enlisting a personal chef, he’s already feeling the benefits of the added layer of focus. “I feel great,” he beams. “I wake up in the morning and I got a lot more energy just from paying attention to my diet. I’ve been amazed by some of the things I’ve seen change with my body and how I feel, just because of my diet.”

All of that work, focus and drive to outwork his competition, despite the growing star profile, the added off-court endorsements and the accolades that keep piling up, has Lillard looking to carry the Blazers right back into the postseason and toward being considered an elite squad. “You look at teams like the Spurs and Oklahoma City, and you see that they do it every year,” he notes. “We’ve only done it one time. Before we can say we are an elite team, we gotta keep proving it up.”

As with anything, tasting those successes and incremental leaps forward can push the League’s greatest competitors even further forward, and as Dame looks back on it, hitting “The Shot” against Houston might just be the springboard that allows him to grow, and the Trail Blazers to ultimately advance even further this upcoming year.

“There’s always times where you question yourself a little bit,” Lillard now admits, when discussing his outlook in clutch moments before he hit that series-clinching jumper. “Not that you don’t believe in yourself, but you’re just like, What if this happens? What if that happened? In that moment (against Houston), nothing crossed my mind. I never doubted what could happen for a second.”

The scary thing for the League is Lillard was already one of the game’s very best in clutch situations. Now he’s saying he’s got zero fear. To the eye test, nearly no one looks more confident and laser-focused when hoisting a last-second jumper with the game on the line. A closer look at the actual clutch stats from last season, which NBA.com classifies as taking place during the last five minutes of a game where neither team is up by more than 5 points, shows Damian’s 47.3 percent mark from the field ranks only second to LeBron James’ 48.4 percent.

“I didn’t fear anything going wrong,” Lillard says four months later of The Shot. “Now, going into those situations, or if the game is on the line, or if in our season we lose seven games in a row, I won’t be worried. I think it changed me in that way, that I’ll always feel like I can do better or I can help our team turn things around.”

As they head into the 2014-15 season, now he and the Blazers just gotta keep proving it up.