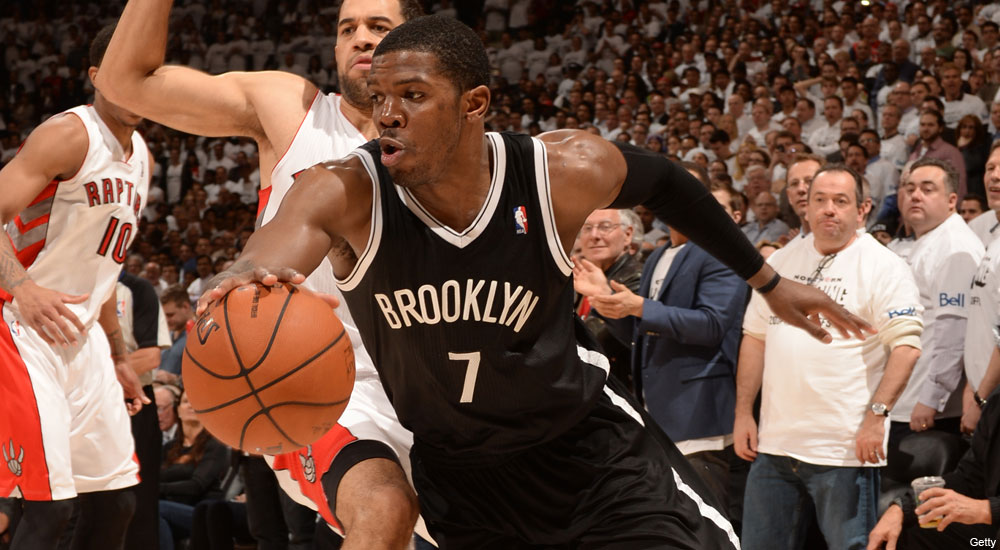 Perhaps it was a certain adopted irony that compelled new Brooklyn resident Kevin Garnett last season to give Joe Johnson his most catchy nickname to date: “Joe Jesus.” Yes, when his teammates need him to, Johnson comes through more often than not. In the last 15 years, few players have been better at shooting with 10 or less seconds left on the game clock.

But whereas the actual Jesus has first-team All-Religious Figure status on perennial lockdown, Joe Johnson has made All-NBA only once in his 13 seasons. And it was a Third Team selection at that. Jesus, it’s said, was able to walk on water and raise the dead. Joe, we now know, is no Savior. He doesn’t perform real miracles. He causes jaws to drop, oh, maybe once every half a decade:

If you’re going to pass out the “Jesus” nickname, and do it in a non-Shuttleworth way, give it to someone who consistently does amazing things like Kobe Bryant. It’s Bryant, after all, about whom there is so much anticipation of a glorious return. He’s the one who inspires passion in millions of fanatics. Johnson, by contrast, is a “professional shot-maker who’s always been just this side of great and who, despite the All-Star berths and max money, never moved (or even really nudged) the needle for the lion’s share of NBA fans,” as Yahoo’s Daniel Devine wrote.

Fanatics simply don’t congregate in Johnson’s name (unless you count this guy.) The 6-7 shooting guard isn’t the singular talent Kobe is, or—for that matter—LeBron, KD or Rose are. But that shouldn’t diminish what an accomplishment it is that Johnson has become the Brooklyn Nets’ best player the last two years. While injuries have sidelined or hampered younger stars like Brook Lopez and Deron Williams, Johnson has developed into the silent leader of one of the East’s top teams.

As disappointing as Brooklyn has been relative to the fortunes sunk into its roster, it would be much worse had Johnson not in the first round of last year’s Playoffs led his Nets to a Game 7 win at Toronto. Joe was pure bitcoin in the fourth, uploading half of his team-high 26 points including 11 straight Nets points in a four-minute span. In the next series, the Nets fell to the Heat in five games, with Johnson at times struggling in one-on-one matchups with LeBron James. Yet it’s Deron Williams who deserves more blame for the team’s inability to make that series more competitive. On more than one occasion, the once-superstar point guard deferred to teammates in the waning minutes of fourth quarters instead of trying to break down the defense and drive to the basket himself.

At times, it seems like steady offense from Johnson may be the only sure thing Brooklyn has coming over from last season. Head coach Jason Kidd’s out; Lionel Hollins is in. Paul Pierce and Shaun Livingston are out; Bogan Bogdanovic and Jarrett Jack are in. With expanded roles for Mirza Teletovic, Mason Plumlee and Kevin Garnett, and more significantly the return of a healthy Deron Williams and Brook Lopez, don’t expect Johnson to shoot as much in 2014-15. Expect Johnson’s minutes and points to wane as others take the burden off his shoulders.

If needed, though, they know where to go in the clutch. It could be at the top of the key, from where Johnson has the step-back three or drive and floater at his disposal. Then again, perhaps it will be in the post, where at 240 pounds he is simply too big for 99 percent of the NBA’s shooting guards to handle (Exhibit A: DeMar Derozan). Twelve feet away from the net, back turned to basket and ball in hand, Johnson goes to work like few other shooting guards this side of Bryant—as comfortable as a seasoned carpenter at his lathe.