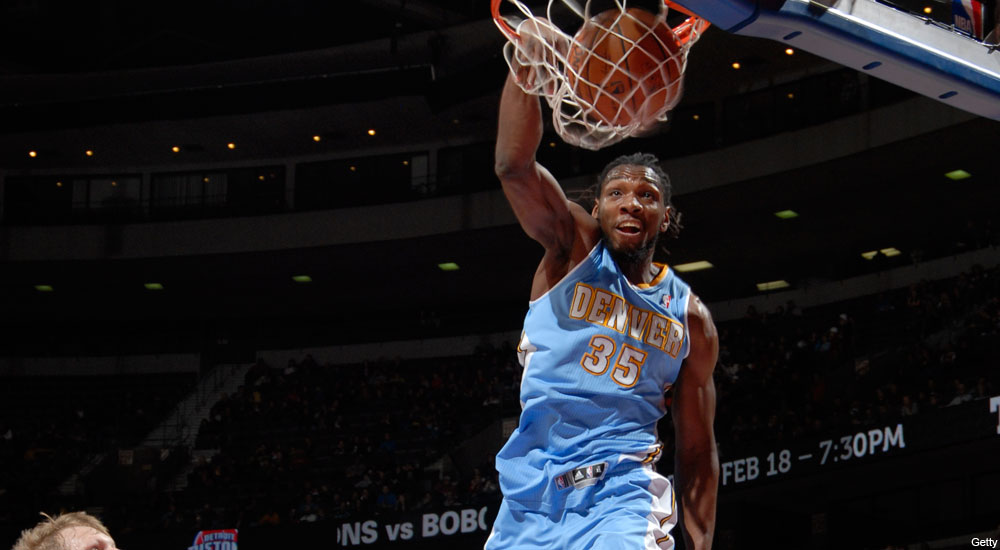 It’s been a great summer for Kenneth Faried. Fresh off of winning a Gold medal in Spain with the USA at the FIBA World Cup, he now finds himself eligible to get paid. The Manimal will surely command more than his 2013-14 averages of 14 and 9 reflected on the open market, but things weren’t always so easy.

Growing up in Jersey, Faried did not find himself getting much love at all coming out of Newark Tech. He was viewed as being too small (listed at just 6-6 and 185 pounds) to play the 4-spot at a big-time school and despite playing for the esteemed NJ Playaz on the AAU circuit, he still found himself choosing between schools that the average college fan couldn’t pinpoint on a map, eventually settling at Morehead State.

From the second he stepped foot on campus in tiny Morehead, KY, he was a walking double-double. In fact, he averaged a double-double throughout his last three seasons and even led the nation boards one season. Faried flirted with bouncing to the League after his junior campaign, but returned for his senior year for the Eagles. After killing it in his final campaign to the tune of nearly 17 points and 15 boards a night, he landed in the first round to the Nuggets with the 22nd pick.

Since he’s been in the League, he’s put in the work to get better and better each year. Faried’s scoring and usage rates have went up each year with the Nuggets. While there are a number of power forwards who fill up the stat sheet more, the folks at USA Basketball still gave him a shot to make this summer’s World Cup team. Once considered a long shot to even make the final team that went across the pond, the massive strides that he’s made in his game eventually made him one of the stories of the summer.

One of the main things that makes Faried a problem on the offensive end is his ability to score the ball in so many ways. We all know that he’s neither going to hit you with a series of Hakeem dream skake’s on the block, nor is he going to shoot pick and pop threes a la Kevin Love. But he manages to get buckets in a diverse enough way to keep the D guessing.

According to our friends at Synergy Sports, Faried scored nearly 85 percent of his points in the following five categories: Cuts to the basket, pick and roll finishes, offensive rebound putbacks, post-ups and in transition. While many of these may seem similar, it’s a testament to the work that the Jersey kid has put in since the days that he was fighting for a scholarship just seven years ago.

Known for his rim-running and scoring in transition with Team USA, Faried was actually a legit low post threat for the Nuggs this past year. He was automatic finishing over his left shoulder with his right hand hook and showed a powerful drop step going to the rim. Out of pick-and-roll situations, Faried does a great job of delaying his roll to the rack, throwing the D’s timing off in the process. Once he has the ball with a full head of steam, he’s pretty hard to stop attacking the tin, though he can tend to get a little out of control at times.

Two areas that we haven’t found Faried filling it up in quite yet are in ISOs or shooting the ball from the outside. His perimeter skills are still a work in progress, but there were a number of times in which he was clearly uncomfortable with the rock in his hands from 15 feet and out, making him a bit predictable to guard from that area of the hardwood.

With so much of Faried’s effort on the defensive end going toward anchoring Denver on the glass, he can tend to get lost at times on rotations and get caught up on screens. Likewise, there are times that he has problems guarding quicker guys in space and bigger players (he’s often forced to defend centers) on the block. Still, the energy that he provides on this end of the floor certainly makes up for these occasional deficiencies.

Given that the Manimal’s effect on the hardwood goes so much further than any scouting report or analytic stat sheet can show, he is going to be one of the more difficult players to gauge on the open market. Denver had reportedly shopped him all throughout the season last year and Faried had no problem talking about how that bothered him. Now, the ball is in Nuggets GM Tim Connely’s court as far as an extension is concerned and the clock is ticking.