Golden State's 2-guard may be the best two-way wing in the game. 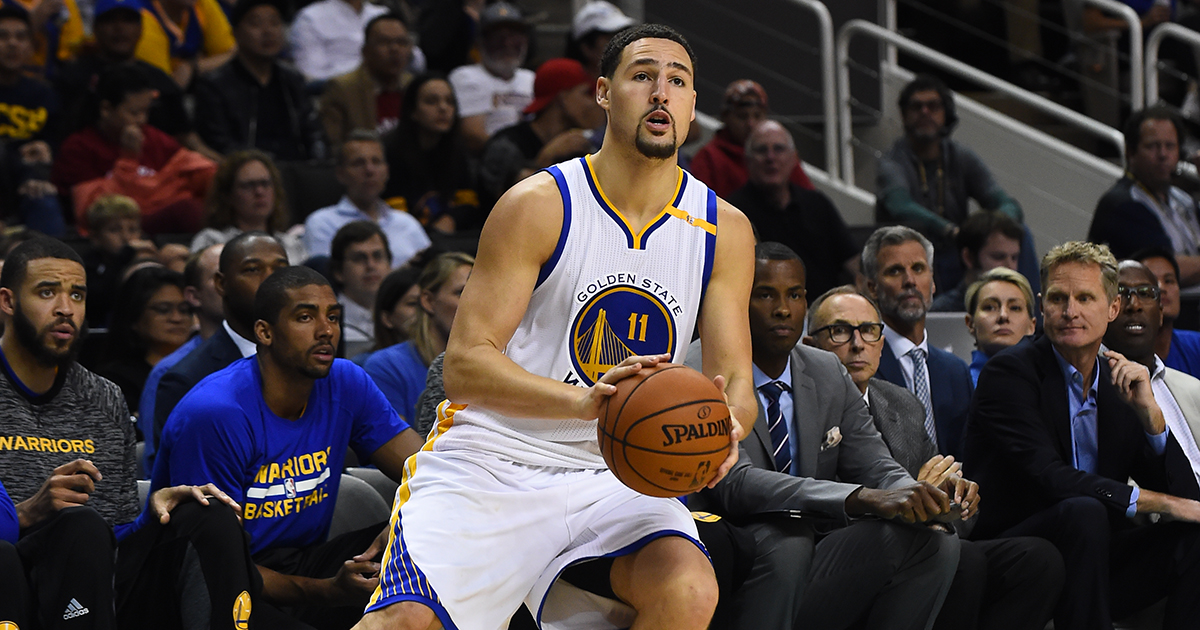 Fact: Klay Thompson is going to go harder this year than he has at any point in his NBA career to this point.

I’m not suggesting Klay Thompson didn’t play as hard, or even harder, than everyone else on the floor during his first five seasons in the NBA. You don’t make two All-Star games, earn two All-NBA nods and win an NBA title as the second-best player on your team by coasting. Nor do you move up from 29 to 17 to 13 on this list, as he’s done over the last three seasons, which now ranks KT ahead of names like Jimmy Butler, DeMar DeRozan and Dwyane Wade.

Last season Thompson averaged 22.1 ppg on 47 percent field-goal shooting (43 percent from deep) and hit more three-pointers in a single season than any player in the history of the League not named Stephen Curry.

I’m not suggesting that he doesn’t show emotion, either, like a notoriously stoic Tim Duncan type. Klay is by his own admission the strong, silent type, but we’ve seen outbursts of passion at times during the Playoffs.

Still, if there’s a knock on Klay Thompson, it would have to be his temperament. Right? Because surely you can’t knock his game, with a jumper second only to his reigning MVP backcourt bro, and suffocating defense on the other end. (Shout out to all those begging us the last few years to re-shuffle these rankings with more emphasis on defense.) But maybe, just maybe, you can doubt his fire. Maybe, you’d say, he doesn’t demand the rock like other players ranked this high, or fire up his troops or play the part of vocal leader or assert himself aggressively enough at times.

A funny thing happened this summer, though. When Golden State made the biggest splash of the summer, adding Kevin Durant to a team that just made history in the regular season and has made back-to-back trips to the Finals, a lot of people were very, very excited. Everywhere, not just in San Francisco. Meanwhile Klay Thompson was, well, here’s what he told Shams Charania of The Vertical:

“I was sleeping,” Thompson said, “and my brother came to my room and woke me up to tell me that KD committed. I didn’t believe it at first when he told me, so I had to check my phone and verify it. I was like, ‘Seriously? KD really chose us?’ It was an incredible moment for our organization, and I was psyched. We had the final form of our team. […] And then I went back to sleep.”

He went back to sleep. WTF? That’s the Klay Thompson I’m talking about. Or at least, that’s the Klay Thompson we’ve known until now. Super chill, bra. This basketball stuff is cool, but anyone wanna hit the beach and surf later? Maybe eat some fish tacos? (I have no idea if Klay says these things, but like, he might.)

But then, he followed that up with this:

“I feel kind of disrespected that people keep using the term sacrifice to describe me and describe us,” Thompson said. “We all want to see each other do well. But I’m not sacrificing [expletive], because my game isn’t changing. I’m still going to try to get buckets, hit shots, come off screens. I want to win and have a fun time every game we play.

Here's 75 seconds of Klay Thompson and Kevin Durant not missing until KD snaps the streak pic.twitter.com/6g3hUh57cQ

There’s only one shooting guard ahead of Thompson on this list. It’s not exactly a secret that it’ll be James Harden. Then again, new Rockets coach Mike D’Antoni is now calling Harden a PG, so maybe it’s time to anoint Klay as the top 2-guard in the game.

(Not that he gives a fuck.)