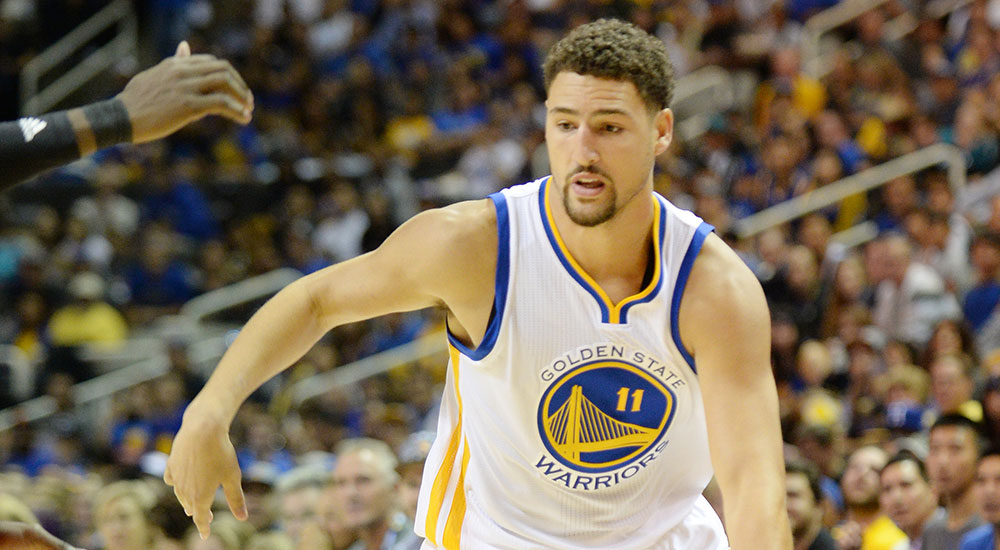 Remember Bill Duffy’s comment about Klay Thompson being the best “two-way, 2-guard” in the NBA prior to last season? Some felt it was blasphemy due to the fact he was placing Thompson over guys out West like Kobe Bryant and James Harden.

But with the Black Mamba’s inconsistency due to injuries these past two seasons and Harden’s lack thereof on the defensive end, that statement is much more valid now since the progression Thompson has made in the past year. So much so that he’s moved up the ranks from last year’s No. 29 spot to No. 17 on this year’s SLAM Top 50, respectively.

Despite dealing with trade rumors that possibly would have sent him to Minnesota for Kevin Love and discussions of whether or not he was a max player, the Warriors would in fact give Thompson a near-max deal, signing him to a four-year, $70 million extension. And after a 67-win regular season (most in franchise history), the Dubs defeated LeBron and the Cleveland Cavaliers in the NBA Finals and brought the Larry O’Brian trophy back to the Bay Area since 1975.

Since Duffy’s comment, things could’ve not gotten any better for the four-year man out of Washington State. Thompson’s numbers increased since entering the L in 2011—21.7 points, 2.9 assists and 3.2 rebounds per game with a player efficiency rating of 20.86.

He shot 46.3 percent from the field and 41.8 percent from the three-point line, and for the second consecutive year, Thompson finished second in three-point field goals behind fellow Splash Brother, Steph Curry. He also ditched the Swoosh and inked a shoe deal with Chinese athletic sportswear company ANTA. (Insert “WHAT’RE THOOOOSE” comment here.)

The list of accolades on his résumé continues to stack up with a Gold medal after Team USA defeated Serbia in the FIBA World Cup last summer. Thompson also made his All-Star Game debut as he started for the West this past season.

Night in and night out, basketball fans across the globe are in for something special when Thompson and his backcourt brethren, Curry, take the court. Take January 23, 2015 for example: a day Sacramento Kings fans and players want to never remember.

Dubbed as “The Quarter,” Killa Klay caught fire as he shot a stellar 13-13 from the field and 9-9 from behind the arc, scoring 37 of his 52 points in the third quarter all while setting a new NBA record.

On the offensive end, there’s no room for error when sticking Thompson. Give him any kind of space on the perimeter and that release is too quick…straight three-ball right in your eye. Play him up too close and he’s blowing past you for either that mid-range jumper or putting you on a poster—just ask Robin Lopez, Timofy Mozgov and Kyle Singler.

Defensively, he’s a rock and has been praised for his on-ball defense. At 6-7, 205 pounds, he uses every ounce on that frame to disrupt players like Kobe, LeBron James and Chris Paul.

Entering his fifth year, one key aspect in his game he’ll look to emphasize this season is improving his playmaking ability with the help of Steve Nash, the Warriors’ recently hired player development consultant.

During the team’s media day last Monday, Thompson addressed the focus coming off that memorable championship run and being that team with the target on their back.

“We won’t be complacent, I’ll tell you that,” says Thompson. “These guys are too competitive. We’ve tasted winning, and we’re kind of addicted.”

All in all, it’s upward now for Thompson. The quest for back-to-back titles begins in 21 days.