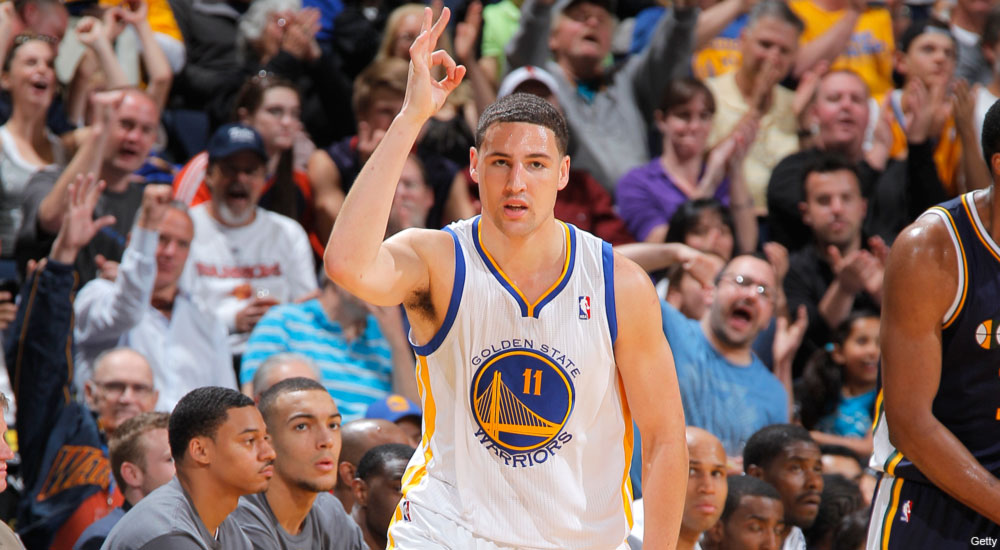 Back in the day, NBA players were simply basketball players. Their importance to their teams was measured by their on-court play. In that era Klay Thompson would simply have been known as one half of the best backcourt in the NBA. The Quiet Beatle in a talented lineup full of more vocal veterans.

Today’s players are measured on two axes: Their on-court play and their cap numbers. In an era with a restrictive cap, every fan knows which players live up to their numbers and which are payroll sinks. As both a player and a cap number, Klay Thompson of the Golden State Warriors, No. 29 in the #SLAMTop50, will have a major impact this season.

First, there’s Thompson the player. After his strong performance for Team USA this summer, arguments about whether he will become an All-Star have ceased—sooner or later, it will happen.

Thompson has been a top-tier three-point shooter since entering the League three years ago, but his release has gotten faster, more like fellow Splash Brother Steph Curry. At this point he needs very little space to drop bombs over opposing defenses, and hit more than 500 threes during his first three seasons—an NBA record.

Over time his mid-range game has improved too, and worst of all for opponents he is gradually developing a post game to take advantage of the size advantage he enjoys as a 6-7 shooting guard. Even his ball handling, once a liability, has become steady, and was a focus of his summer workouts this year.

Defensively he’s a rock, one of the better perimeter defenders in the Western Conference. Many nights, the quietly intense Thompson takes the toughest defensive assignments from Curry.

Does all this make him a superstar? Probably not. But he’s very, very good. The kind of player who may not light the way for an entire franchise but who could eventually—maybe as soon as this year—be a third option, maybe even a second option, on a Championship contender, much like perimeter players such as Manu Ginobili, Joe Dumars and Andrew Toney were in the past. A player who has his number retired, and in the right situation, with the right teammates, might even be considered for the Hall of Fame.

As a player, any team would love to have him. But as a cap number? Like so many things, it depends on the price. Unless he signs an extension by October 31, Thompson is going to be a restricted free agent after the season, and his agent, Bill Duffy, says Thompson should receive a max contract. In terms of gauging the market, Duffy probably isn’t far off: A big season from Thompson could yield multiple offers close to the max, from the kind of teams who pay top dollar for talent and ask (salary cap) questions later. But will any of those teams be as close to real contention as the Warriors? Highly unlikely.

Then there’s the looming TV deal the NBA will negotiate next year. It could raise the salary cap just as Curry hits free agency, making it possible to keep both players with enough space left to remain competitive. But as with any deal, it’s all conjecture until the ink dries.

And so the dance begins. Will Thompson take less money for a better chance at basketball immortality, or will he shoehorn himself into a max contract he’s unlikely to live up to? Will the Warriors cave and give Thompson what he wants before October 31, preventing him from hitting the market at all, even if it damns the team to middle-round hell for the next couple of springs? Are they certain the cap will rise enough to make this all a non-issue?

As both a player and a cap number, the stakes are high for Klay Thompson and Warriors this year. If they manage the situation right—and Thompson continues his steady improvement—they have a chance to position the team for Championship contention for years to come.