With PG out of town, Myles Turner is the Pacers' franchise player. 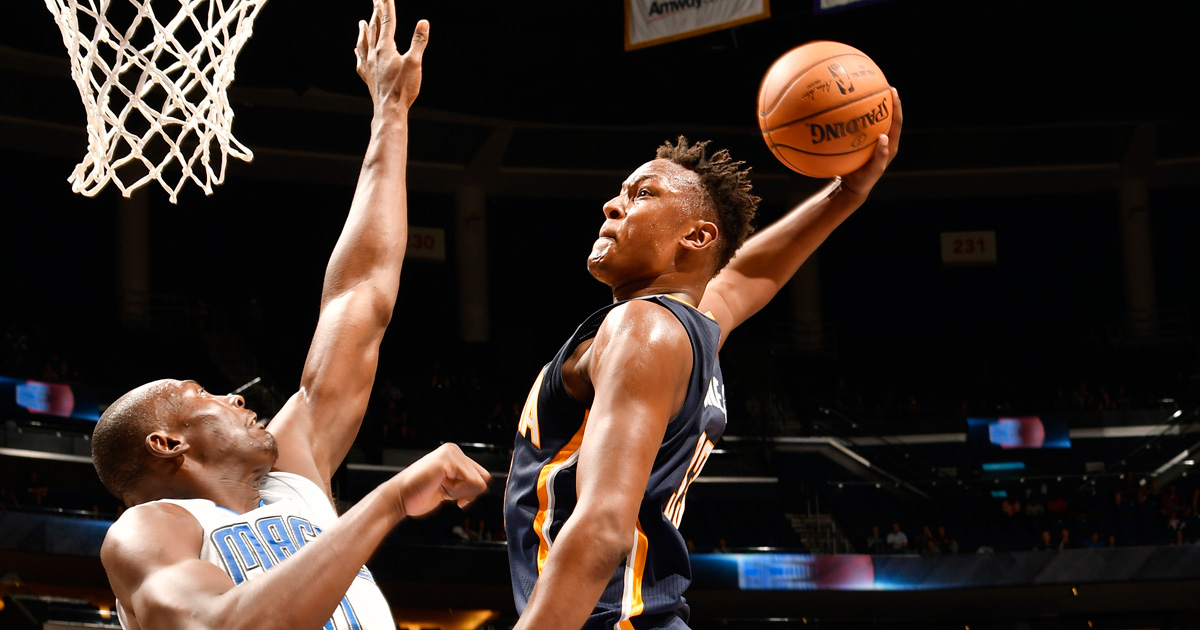 It’s easy for Myles Turner’s name to get lost in the shuffle during the offseason.

Especially during a summer like the one we just had. While barbershops and Twitter feeds were abuzz with chatter about the Kyrie Irving-Isaiah Thomas soap opera, or #HoodieMelo, or new homes for CP3, Jimmy Butler and Gordon Hayward, the Pacers big man stayed out of the news.

When OKC acquired four-time All-Star Paul George from Indiana, the casual NBA fan focused on the trade from the Thunder’s perspective (Duh—the Thunder are the better team, and OKC just paired George with the reigning MVP).

This lack of any sort of hype for the Pacers is the perfect space for Turner to occupy. The new face of the franchise is ready to blow.

With George out of the picture, Turner’s touches are going to skyrocket. Only 21, the Texas product already has one of the best midrange jumpers in the League, regardless of position: Turner shot 42.7 percent from 15-19 feet in 2016-17.

And like big man contemporaries Karl-Anthony Towns and Joel Embiid, Turner’s 3-point shot is coming along: Turner shot 35 percent from deep in 16-17, and 50 percent from beyond the arc in January.

After improving in every statistical category from year one to year two, it’s time for Turner to get in his duffle down low. Turner gets his highlight dunks and transition finishes, but he has to develop one or two go-to moves in the post if he truly wants to be taken seriously in the paint. In year three, he has to stop trying to shoot over defenders’ heads near the basket.

Okay, be forewarned: this is when I spend two paragraphs on Darren Collison.

With Darren Collison (likely) snagging the starting PG spot after Jeff Teague’s departure to Minnesota, it is possible that Turner’s pick-and-pop opportunities suffer. Collison is unquestionably slower than Teague, so there is a scenario where Turner’s growth is somewhat stunted, his full potential put on pause for another season or two.

More likely, Collison— starting PG or not— won’t actually control the offense all that much. As starting point guard for the Kings last season, Collison only averaged 74.8 touches per game, which put him behind 23 other point guards. Expect Victor Oladipo and Lance Stephenson to share duties at the one.

Anyway, back to Turner. The rising star is five months removed from being able to buy his first legal drink, ceiling yet undetermined, a 6-11, new-age big, who moves like fellow No. 33 Patrick Ewing, grew up watching midrange assassin Kevin Durant, and is already beginning to blend *a small part* of their two games together.

Let’s just be honest, let’s just be real: 2K ratings are now the true barometer for NBA players (besides, uh, the #SLAMTop50 of course). Myles Turner just cracked the Top 10 Centers list for 2K18, and he’s only going one direction on that list the next few years.

Previous Ranking:
Has Never Been Ranked On The #SLAMTop50