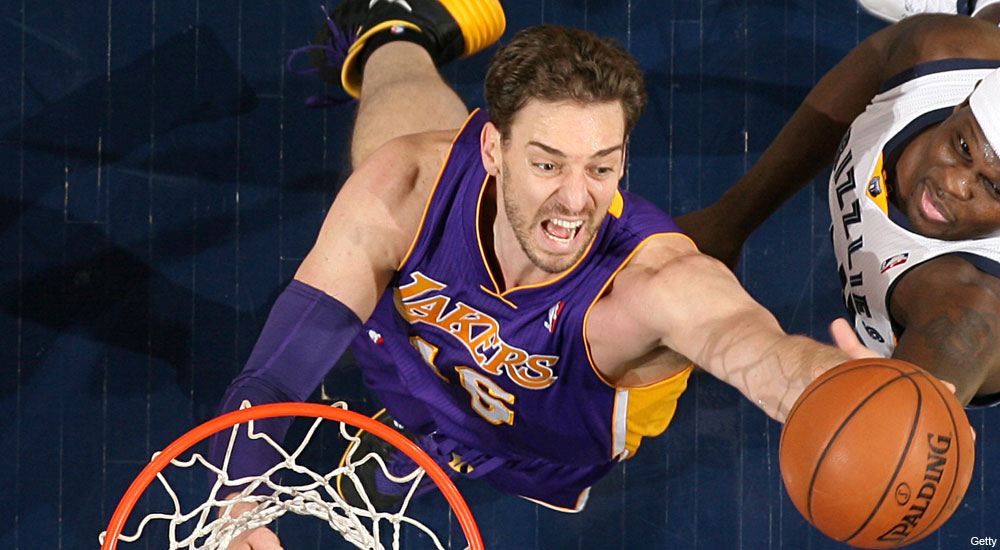 The last six and a half seasons for Pau Gasol have been filled with memories the power forward will cherish way after his career has come to an end.

Upon his trade to the Los Angeles Lakers from the Memphis Grizzlies in 2008, Gasol helped improve the fortunes of the Lake Show immediately. He was critical in helping deliver two Championships to the franchise, as his prolific post and passing skills were finally on full display for a national audience.

Those accomplishments, along with teaming up with one of the game’s greatest warriors in Kobe Bryant, and being coached by arguably the greatest coach the League has seen in Phil Jackson, should be the memories Gasol holds onto when he thinks back to his time in L.A.

It’s those memories that will hopefully shine brighter than when he recalls the frustrations of his final seasons in purple and gold.

The frustrations were many. There were the ever-present trade rumors, the trade that former NBA commissioner David Stern voided that would have sent Gasol to Houston and Chris Paul to the Lakers. There was the unsuccessful pairing with Dwight Howard in former Lakers’ coach Mike D’Antoni’s perimeter-orientated offense, as well as the public struggles with fitting into that system, which did little to take advantage of Gasol’s skills in the post.

During this time, Gasol put on some additional weight, which probably only aided in the several injuries he suffered the past few seasons. The excess weight and injuries hindered the fluidness of his footwork on the low-block and the grace in which his game was built on.

Those watching the Spaniard the past few seasons could see a player trying to make the most out of a situation he had grown extremely uncomfortable in. Despite his apparent unhappiness, injuries, and time in D’Antoni’s system, he still managed to average 17.4 points, 9.7 rebounds and 1.5 blocks in 31.4 minutes last season.

When he became a free agent this summer, although he loved L.A., he wanted to play for a team that could contend for a title, and valued his game. Gasol’s instincts led him to turn down more lucrative offers on the table and sign with the Chicago Bulls.

Even with both the Lakers and Bulls focusing much of their time in free agency on Carmelo Anthony, Chicago and Gasol had been linked together numerous times over the years in trade rumors. A meeting between the two sides, along with Joakim Noah, and a phone conversation with Derrick Rose; was enough to make Gasol feel wanted and see that he could be a key piece in the Bulls realizing their title aspirations.

His presence adds depth and makes for one of the most formidable frontlines in the League, in joining Noah and Taj Gibson.

Fully healthy, some pounds lighter, Gasol served reminder of why he’s still one of the game’s best power forwards during the FIBA World Cup of Basketball. He averaged 20 points in 26.6 minutes on 63.5 percent shooting and added 5.9 rebounds for Spain.

More importantly than those numbers was the way he collected them.

It was the way he moved and ran the floor, how active he was on the defensive end. In dominating both inside and out, he looked more like the player that helped the Lakers win those back-to-back titles in ’09 and 2010, rather then the player that seemed to be worn down by circumstances the last two seasons.

“I think he’s proving a lot of people wrong,” Rose said. “His touch around the rim is crazy. He should be able to get eight to 10 points from me just driving and dishing him the ball. I think that I’m going to get a lot more assists this year because of that.”

“His defense, his rebounding, his passing, his scoring—all those things have been very, very good,” Thibodeau said. “I love the way he is moving. He looks like he’s completely healthy. He’s rejuvenated.”

If Rose returns to form, along with the new dimension that Gasol gives the Bulls on offense; with their coaching, depth, collective experience, tenacity and will, it’s not a stretch to consider them definite favorites over the new-look Cleveland Cavaliers in the Eastern Conference—health permitting, of course.

Besides the cold weather, Gasol will still enjoy many of the off-the-court hobbies that he did in Los Angeles. With a profound interest in medicine, during his introductory Bulls press conference, he said he planned on integrating himself with doctors and hospitals in the medical district around the United Center.

One of Gasol’s fondest memories as a youth was watching Michael Jordan and Dream Team from his home in Spain. He now gets to fortify the remainder of professional career in the house that Mike built.

The frustrations he endured during the end of his time in Los Angeles are now in the rearview. It’s on Pau to help construct how the newest chapter in his career will be remembered.