With a full bill of health and a sneaky good supporting cast, PG-13 will be making his case for MVP in 2016-17. 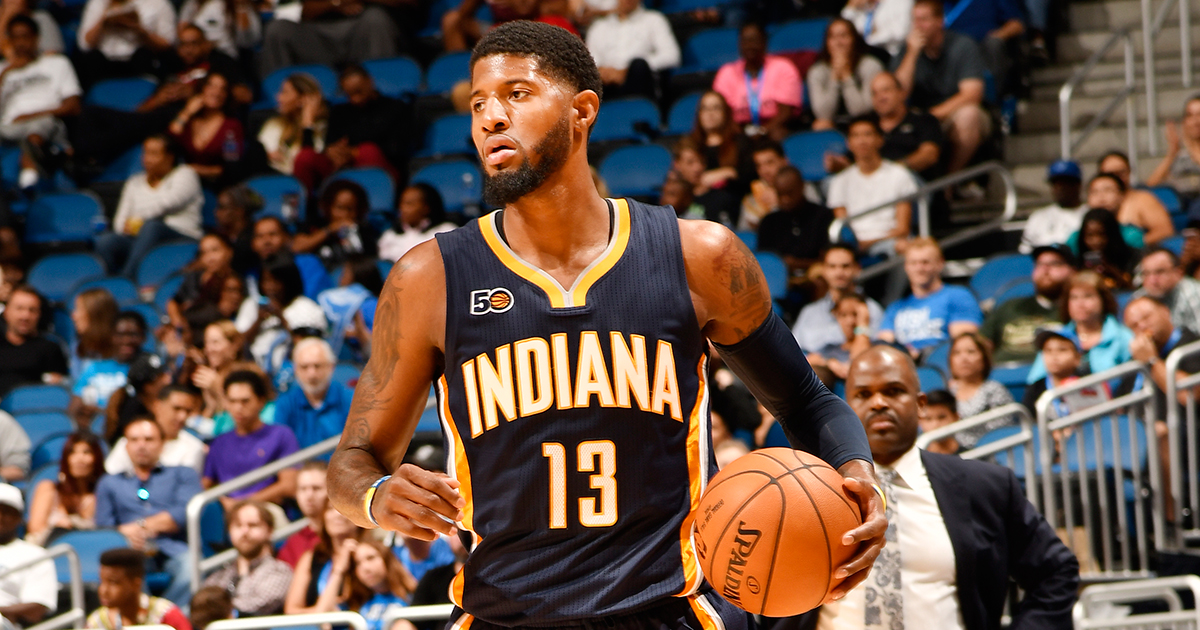 Twenty-six months ago Paul George broke his leg in half during a Team USA scrimmage. On the eve of the 2016-17 season, he’s coming for LeBron’s neck.

George’s 2015-16 comeback season may have been one of the most under-appreciated in recent League history. With the Warriors chasing 73 wins, Kevin Durant’s free agency looming and LeBron James being LeBron James, it’s not shocking that George’s year got lost in the shuffle.

In short, George’s year was nothing short of incredible—from both a statistical and health standpoint.

After finally recovering from his gruesome injury, PG played in the final six games of the 2014-15 season but clearly wasn’t himself and went from throwing down graceful dunks to blowing wide open layups. As he told our own Abe Schwadron, George had to more or less teach himself how to play basketball again:

“I don’t know, it was weird,” George remembers of the blown layup. “I couldn’t slow down, I was trying to get my feet right, get my steps right. And that’s something I’ve never—I naturally just know how to dunk the ball, but for that particular time, there was just so much stuff going through my mind on how to get ready to finish to where, when I got to the basket, it was too fast, and I just blew the whole layup.”

Think about that. One of the 10 best basketball players in the world had to teach himself how to play again.

Last season, George played in 81 games and averaged a career-high 23.1 points per game while tying his career highs of 4.1 assists and 1.9 steals per. He also grabbed 7 boards a night and lead the Pacers to 45 wins and a somewhat disappointing 7th seed in the East, where they were bumped from the Playoffs in the first round by the Raptors.

In the offseason, Indiana hit the reset button and decided not to re-up Frank Vogel’s contract, instead opting to promote Nate McMillan and overhaul the roster by signing experienced, complementary pieces to work around George. Jeff Teague, Thad Young and Al Jefferson were brought in and with the prospected improvement of Myles Turner, Indy is primed to make a run at the No. 2 seed in the East.

Of course, the success of the Pacers starts and ends with Paul George’s play. At the Olympics, George was arguably the second best player on the team behind Kevin Durant. Showing his versatility on both ends of the floor, PG’s well-earned Gold medal boosted his confidence.

Speaking of the Olympics, don’t be surprised if George experiences a Team USA-inspired bump in both production and accolades this season. After the 2012 Olympics, Carmelo Anthony went on to lead the NBA in scoring and finished third in MVP voting, LeBron James went on to win an NBA title. In fact, nine out of the 12 players landed on either one of the All-NBA teams, All-Rookie teams or All-Defensive teams.

There is no reason not to expect Paul George to have similar success.

“They’re not overworked, we don’t grind them at all, it’s structured, we don’t work very long but we work hard in a short period of time, it’s the right environment for them. They get a ton of hots up in those couple weeks and they’re better prepared. I think they have a leg up when the season starts.”

Late last month, George flat out said he “definitely wants to be MVP this year.” A few days before that, he put LeBron on notice that after years of falling short against the best player in the world, he’s finally ready to take the throne:

“I’ve always matched up with him like, ‘I know he can do this, I know he can do that,’ ” George said about James to The Vertical. “Not in an awe fashion, but it’s more so, ‘I’m not supposed to win these games. This is supposed to be the best dude in the NBA. I’m trying to challenge him. I know what I’m up against.’ Now it’s, ‘I’m ready. I’m ready for you. I’m a veteran. I know you, you know me. Let’s meet here, let’s get this job done.’ I’m prepared. I’ve had time to figure this out. I’ve had time to lick my wounds. I’m ready.”

The real question is, is the rest of the NBA?