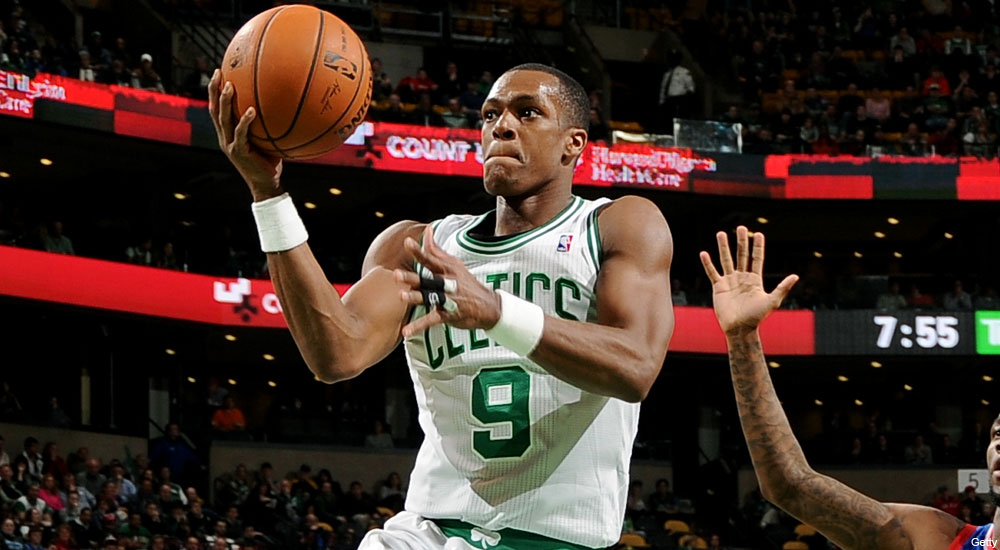 As Mr. Rubenstein, high school teacher, I have been writing #SLAMTop50 posts for the past few years with the aid of some students. My school works with the iMentor program, and this year I’m working with Tessa Yesselman, who is kind of a Rajon Rondo fan, as you shall soon read.

One of her job functions is to come to my school, match students up with a mentor, whom they exchange emails with over the years, hang out with, learn from. She also happens to be a crazed Rondo fan from Boston.

On that note, we voted on these rankings before Rondo “fell in the shower,” so his injury has nothing to do with where he’s ranked. It’s a contract walk year for him, so Summer 2015 we’ll be oversaturated with Free-Agent Rondo like we were with LeBron, Melo, the Dwightmare, Peyton Manning, and so on. For now, he’s a champion superstar on a young team in a weak division.

In the spirit of Rondo the great distributor, I am now passing to Tessa to write about Rajon…

It is the job of a point guard to facilitate, to make every single guy on his team better, to find his teammates better shots than they would otherwise create for themselves and to have a view of the whole court. This is exactly what Rajon Rondo does better than almost anyone else.

Scoring point guards are very trendy—Russell Westbrook, John Wall, Kyrie Irving—and I would not argue that Rondo could outscore them. What I would instead argue is that he’s a better overall point guard. Somewhere along the way, scoring ability and overall talent have become synonymous, or at least very closely linked to each other. This should not be the case.

He is a savant, a throwback to the good old days when passing first and teamwork were valued over flashy dunks and stacking twitter followers. His dominance fills the stat sheet, as is evidenced by the triple-doubles he’s amassed. When he needs to score, he will. When someone else needs to get going, he will find them.

His signature move is an homage to Bob Cousy, a dizzying yet casual behind-the-back pass fake that leaves defenders disoriented and tangled. You can build your team around Rondo and expect magic to happen, and to happen quickly. He’s proved that when the stakes are highest, he will dominate. In his last Playoff series, he almost snuck an injury riddled and decrepit Celtics team past the Heat to the tune of 17 ppg, 11 apg and 6 rpg.

His critics may be right: Rondo’s game isn’t always the stuff that SportsCenter‘s Top 10 Plays are made of. But you don’t look at a stat sheet to gain an understanding as to why he is so good. For a player as complex and intelligent as Rondo, that’s selling his game short.

You have to consider the intangibles. This is a man who will stop at nothing to win. He will jump in the opposing team’s huddle, he will guard your star player even if that player happens to be LeBron James. He will dislocate his shoulder in the most atrocious non-call in NBA Playoff history, and then attempt to keep playing. In Boston, where we value heart, grit and good old blue-collar basketball, he is what we call a true Celtic.

So in the interest of transparency, I am indisputably the biggest champion of Rajon Rondo there is. The other day I was in this class at the gym and we had to plank for three excruciating minutes to end the class. The teacher said to yell out what you were thinking about that was getting you to the finish line… Which is how I found myself yelling out Rondo’s name while everyone around me yelled about pizza and steak and cheese. Kind of the story of my life.

Spare me the guy that grew up playing AAU ball, laughing on the court with his buddies. Give me Rondo, who will stand over a fallen opponent, disdainfully, scouring. Give me Rondo, whose competitive spirit extends far off the court (google Rondo+connect four+kids and read about how he routinely destroys kids in his favorite game on charitable appearances the Celtics) and flirts with being a jerk.

What’s important to remember when you talk about Rondo is that he’s not here for the cameras. He doesn’t care if you like him, and he won’t give you the politically correct answer for the sake of niceties. He’s here to win, and in Boston, where we don’t have room in the rafters to hang conference championship banners (shout out to Miami), we appreciate that.