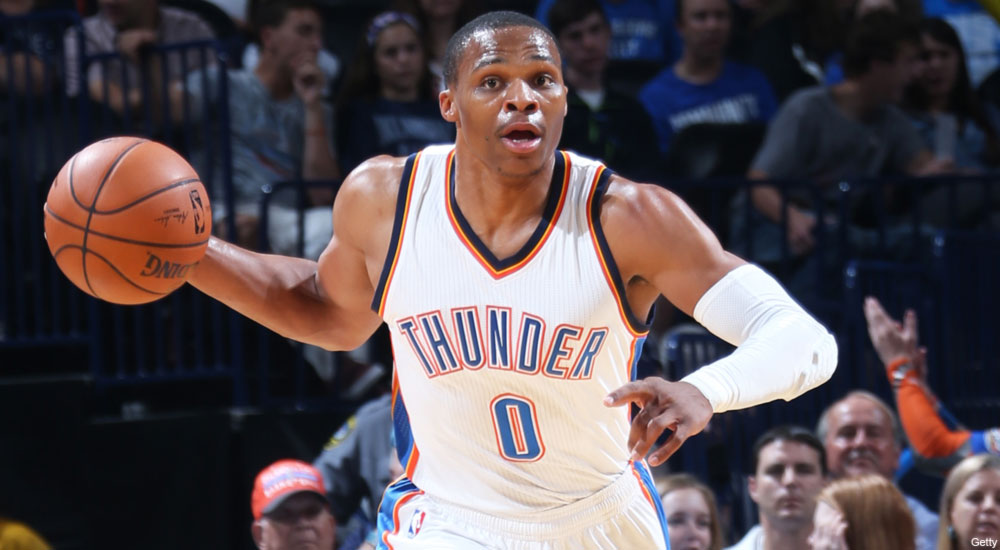 This is what you all have always wanted.

When the news broke that Kevin Durant would be sidelined for up to two months with a foot fracture, basketball fans around the world got their priorities mixed up. Instead of thinking about the ramifications of the reigning MVP suffering the same injury that derailed the careers of many before, you non-believers of Russell Westbrook were eager to think about what the Oklahoma City Thunder would look like with No. 0 as their lead dog versus No. 35. Shame on you.

It’s OK though, because if there’s one thing we’ve all been curious about, it’s what a team led by Russell Westbrook would actually look like. What we didn’t realize is that the opportunity to lead would come as a member of a current team, instead of a team that would consider giving him the reins. Westbrook, a man who is the League’s best one-man fastbreak and plays in a constant state of chaos in motion, will now be asked to do something he’s never done before on a professional level. To be a leader of men.

Westbrook comes in at No. 6 in this year’s #SLAMTop50, a jump six places from his No. 12 spot on the list last year. It’s a superlative Westbrook surely appreciates, but his most important ranking is the one that his head coach Scott Brooks placed upon him to begin the season.

The statement itself from Brooks isn’t the most surprising in the world to hear, as the coach has been with the point guard since virtually the beginning of his tenure in OKC. Heck, Westbrook’s reply was just as unsurprising and exactly what you’d expect from the League’s most absurdly dressed player.

“I do. I’m very honored to hear him say that, but that’s how I feel. I mean, I don’t know what to tell you.” —Russell Westbrook

This is the ultimate time and place for Westbrook’s career. Westbrook is just starting to enter his mental and physical prime, and we’ve seen countless times where players improve when one of their star players goes down due to an injury. Oklahoma City has proven to be one such example, as the Thunder witnessed the improved play of Kevin Durant and Serge Ibaka when Westbrook was forced to remove himself from the lineup. KD would go on to become the League’s Most Valuable Player and Serge would go on to now become the deadliest big guy shooting mid-range jumpers in the League (along with already being the scariest guy defending the rim in the League).

For Westbrook, the one thing we know he can do is attack, attack and attack some more with the ball in his hands. But the one thing Durant has grown into is being a strong distributor of the basketball. It’s not that Westbrook doesn’t have the skill, but that skill could be tested to the limit with Durant possibly being out until the start of 2015. Other skills like becoming a more reliable defender and being judicious with the ball in his hands will be key as the Thunder still field one of the youngest teams in the League.

That’s the beautiful thing about basketball journalists (like myself) and are always trying to find ways to rank who the best are in the game. For me, seeing Westbrook ranked at No. 6 at this point in his career and the roster he’s on, this makes perfect sense.

But the thing that becomes fascinating with Westbrook is that he has the chance to make a run at the No. 1 spot for 2015-16. In two months, when the Thunder bring back the “elegant assassin” and OKC has first place in the League in consideration, would Westbrook begin to garner MVP votes? What could Westbrook’s statistical increases look like? How would Westbrook evolve as a leader of men in his practices, his huddles and his relationships on the team? Could Serge Ibaka average 20-plus points a game? Will Westbrook get to the line 15-plus times a game? We don’t even know if Westbrook’s actually capable of doing any of this, mostly because he hasn’t had to do it since he was in high school.

What if he’s able to address those questions? Would you think different of him? Could Westbrook finally prove to the world that he was just as good as the other MVP guy who happens to play on his team? Could this end up being the best thing that ever happens to Westbrook in the long-term?

If Westbrook is able to addresses the voids left behind and answer the questions that will be asked of him…shouldn’t we expect more than a No. 6 ranking on the #SLAMTop50? Like, maybe a No. 1 ranking instead?

It won’t matter, because when Kevin Durant steps back through that door, Russell Westbrook will still ultimately know what his role is. Will he be the same player as he’d always been? Probably not, but he just might end up being better.

A Russell Westbrook with no restrictions? Sign me up for that, even if it’s just for a few months. Let the #0appreciaton movement begin yet again.