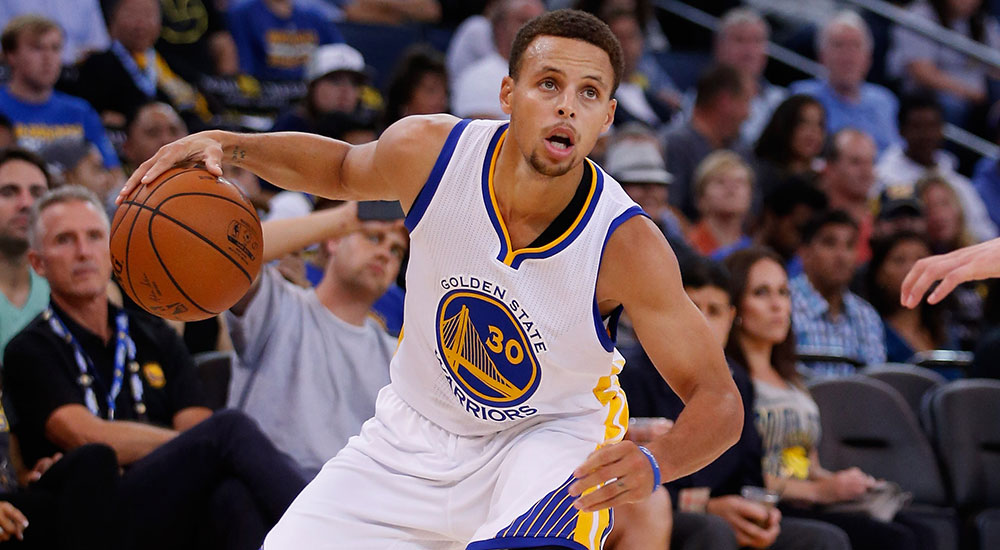 So, afterward, it was easy applaud the Warriors for a job very well done—good job, good effort, one might say in earnest—while suggesting that Golden State was lucky to have been healthy and lucky to have faced the raw Pelicans, the mismatched Grizzlies, the vulnerable Rockets, the bruised Cavaliers. And even if that stuff is totally ridiculous because the Finals are kinda impossible to win (especially from the West), it was easy to suggest that LeBron is still the best player in the League despite losing to the MVP.

That’s what the geniuses here at SLAM believe—that last bit, anyway—and so the best team’s best player is plopped here, at No. 4. Essentially, he’s dope, the Warriors are dope, he just led them to the title, bing bang boom, the guy’s a top-four player in the League. Case closed—this is way simpler than my thing on the mysterious Greek Freak.

But are we sure Curry won’t be better than this next year?

KD is the man, and we all want him to return as a top-1 or -3 or -5 guy. But, sadly, last year muddied my memory of him, and I’ll believe he’s better than Curry when I see it (please, Hoops Gods, can we see it?). They’re both 27, both unguardable, both super-recent MVPs. This is just a matter of preference and guesswork, and my inconsequential nod goes to the defending champ. Next…

The simplified case for Anthony Davis over Curry: Pretty close offensively (Curry is probably the best shooter ever but holds only small leads in usage and efficiency), not close defensively. That’s a tight argument. The only counter, really, relies on the wonky science of the eye test. So enter the spin zone with me.

Curry’s greatest skill is creating momentum shifts all on his own—a wicked up-and-under high off the glass, a timid possession by the opposition, a rebound, an outlet, a transition bucket. There is no scheming against a 32-foot pull-up three that is willed in by a home crowd. A standard Warriors game is close and then Curry finds his stroke and then it’s not close anymore.

Davis is a mesmerizing player, but needs some help to dominate—his teammates need to show up. When the Warriors would pick up steam against the Pelicans in April’s Round 1, New Orleans had a tough time patiently working through its star big man. This is not Davis’ fault, but it is a common problem.

For every two of Curry’s he-made-that-look-easy treys, so often drilled in bang-bang fashion, Davis needs to work for three buckets to equalize. This is largely why the Warriors are so good (and why threes are taking over in general). When Curry (and Klay Thompson) heat up, it is fucking impossible to keep pace.

In a vacuum, or on a spreadsheet, this stuff does not make Curry a better player than Davis, or else Kyle Korver would be up here, too. Davis’ vastly superior defense is a big deal. On paper, in all, Davis is better. But, shit, those Curry-propelled momentum swings have to count for something, right? And what of the fact that I’d rather face a team with Davis than a team with Curry? Also, Steph just won the title. Onto LeBron!

I suppose the only way that Curry-over-LeBron can really be entertained is if next year plays out exactly like last year. Basically, the Cavs mess around during the regular season; the Warriors truck over very good squads nightly; LeBron’s significant dip in field-goal percentage (~57 to 49 last year) turns out to be more than a fluke (he’s played almost 1,100 games to Curry’s 456—yikes); Curry keeps getting better at everything. Curry again capping the season with a title would blow this thing wide open.

The header on this story lets you know that it’s about projections and dreams, not past achievements. Today, LeBron is better than Curry, and Davis and Durant might be, too. Tomorrow, who knows?

Curry’s still on the up and up. That is, as my buddy Abe elegantly puts it, “terrifyingly fucked-up.”