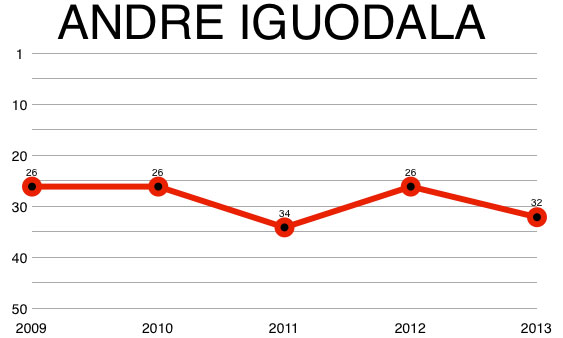 I’ve been doing these Top 50 lists for SLAM for a while now. My process for determining a narrative of some sort in describing why Player X deserves Ranking Y begins with the player’s Basketball Reference page.

Andre Iguodala’s page is lacking I tell you, lacking.

There’s no sponsor on the page (cost: $145/year) for the only AI remaining in the NBA.

The man’s accolades are quite thin, as there’s just a First-Team All-Rookie honor, one Second-Team All-Defense honor and one All-Star appearance in 2012. With career averages of 15 points, 6 rebounds and 5 assists, there’s nothing noticeably distinguishing about Iguodala’s game by his stats or honors.

It’s been that way since his high school days:

“Iguodala grew up in Springfield, IL, at the height of the Bulls dynasty, and patterned himself after Scottie Pippen. He was not the leading scorer at Lanphier High, where he deferred to a gunner named Richard McBride, or at Arizona, where he averaged 12.9 points and set up sniper Salim Stoudamire. ‘He likes being the guy who does everything else,’ says Lawrence Thomas, a coach in Springfield who has worked with Iguodala since ninth grade.”

Being the guy who does “everything else” is the reason why Iguodala is No. 32 in the SLAM Top 50, and frankly…he should be much higher on this list.

What’s scary about the addition of Iguodala to the Golden State Warriors is that many can’t immediately identify what the swingman adds to an already talented roster. Pure shooting, athleticism, handle and perimeter defending are already key skills that are owned by Stephen Curry, Klay Thompson and Harrison Barnes. But Iguodala’s value comes in his reliability on the court, his desire to be deferential and a willingness to utilize his wide skill set.

● Guard the opposing team’s daring point guard or burly forward? Check.
● Be an additional ball-handler when teams press? Check.
● Run the lane to facilitate the fast break and finish at the rim? Check.
● Knock down spot-up threes when the moment arises? Check.
● Crash the boards, dish the rock and facilitate within the offense? Check. Check. Check.

Iguodala is a reliever of stresses. A coach knows that Iguodala will always be in the lineup—that’s what missing just 27 games in nine seasons will do for you. A player knows that Iguodala doesn’t need any help in guarding his man, ever, which is the main reason why he made the 2012 Team USA Olympic squad. A fan knows that Iguodala will never cheat you with his effort. He’s an elite athlete, he balls hard in every single contest and he goes balls to the wall on both ends of the court. These are the reasons why Iguodala commanded large sums of money in the offseason, even if statistically it didn’t seem warranted. It’s why everyone in the League should be terrified of what he can do for the Warriors, because he can do everything Golden State needs him to do. Even if that means being the go-to guy at times.

Iguodala is the exact type of player who just gets it, and that’s the reason why you want him on your team.

“‘I learned from being a go-to guy what I didn’t like,’ said Iguodala. ‘Coaches tell you, ‘Get to the hole. Don’t settle for jump shots.’ So when I guard somebody, I want them to settle for jumpers-outside the paint but inside the three-point line—and then use my length to contest late.’ Iguodala memorizes where opponents hold the ball before they raise it up.”

I’m not sure how many players above and below Iguodala in the Top 50 can have the same things said about themselves. It’s the reason why having Iguodala ranked at No. 32 on this list feels like a travesty, and it’s the reason why the Warriors are going to be a real problem for all foes in the upcoming season.