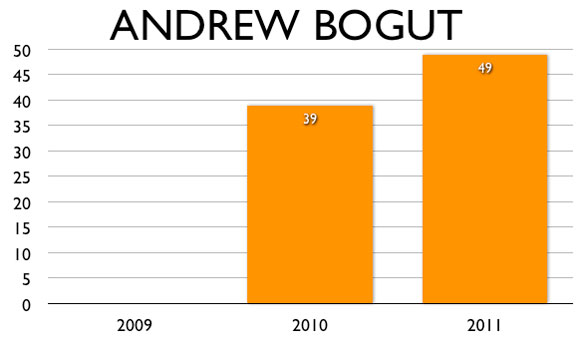 There’s a chance Andrew Bogut will play in the Australian professional league during the lockout. It’s a fairytale that gets good run in the national newspapers about three or four times a week; the media attempts to generate interest in a starved sport, and the player floats the possibility of finally connecting with his home country,

where they can reflect in his somewhat unlikely stardom.

The realistic part of your mind tells you it is a pipedream, but in weaker, more vulnerable moments you think, geez, with everything else going on this offseason, it just might happen. But typically there is a bump in the road that may keep this from reality: The team that lands Bogut is the one who first pays the ghastly insurance cost to cover his professional salary.

Bogut playing in the Australian league presents a two-fold opportunity: The most successful male basketball player Australia has produced gives himself to his country for something at once more and less than an Olympic run, where he’s finally packaged for them, and they can follow him daily or actually see him play in person; it also could make people over here give a crap about the local professional league, which, as of about the last 14 years, has been comfortably residing alongside “Winning the Lottery” in the probability file.

Bogut’s career fate has long been a fear of mine. I sometimes wonder if he’ll ever join a team or have teammates who make his acute understanding of the game—four players working without the ball, the offensive running in smooth waves, the bullet pass from the post—fully come to fruition. I watch him play for Milwaukee, revere his somehow-underrated defensive presence and wonder if that aggression will ever transfer to the other end of the floor, where one day he will scowl, scream for the ball, then lean into the post defender before finishing him off with some move that is deft and skillful.

But most persistently, I wonder if he’ll ever truly connect with his homeland, where they’ll buy his jersey, jump online at lunchtime to check the Bucks boxscore, or draw inspiration from his stupidly-untold late-bloomer story—one that needs to be heard by aspiring teenage athletes of any sport.

I don’t know exactly why that sticks with me, it just seems that his impact off the floor could potentially be more relevant than anything he could do on it; he could be to us what Dirk Nowitzki is to Germany, what Pau Gasol is to Spain. He should be loved here instead of “just” liked, and for various reasons—both of his control and not—he is not.

I don’t know if Bogut will play here during the lockout, but the benefits locally are obvious. I hope it happens, clearly for us—but mostly, for him.