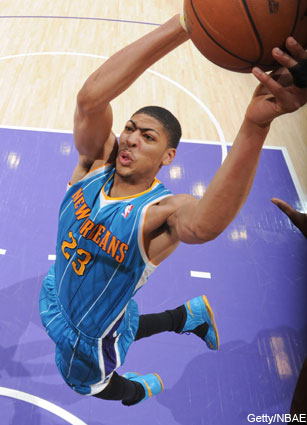 I was present at ATTACK Athletics in Chicago and the Fieldhouse in Merrillville, IN, in the Spring of 2010 because of the buzz surrounding this 6-10 lanky, athletic kid who could supposedly do just about everything on the court.

It took him about four or five trips up and down the court to make me a believer.

Anthony Davis’ story about his meteoric rise from no-namer with an offer from Cleveland State to the most coveted high school player in the country, NCAA National Player of the Year and Champion as a true freshman—and subsequently becoming the No. 1 overall draft pick to the Pelicans the ensuing Draft has been well-documented.

Now checking in at No. 41 on the SLAM Top 50 leading up to his second season in the League, Davis is no longer the main attraction among his peers, though the intrigue remains ever present.

Coming into the League, his shot-blocking ability as well as his general presence in the paint were better than any other amateur. His athleticism for his size allowed him to run, and get off, the floor better than most. The perimeter skills he maintained from his days as a guard prior to his fortuitous growth spurt when he was 15 and 16—including nice form and touch on his shot—could potentially make him as versatile a post player as there is in the League.

The biggest question mark with Davis coming into the NBA was his slight build and how he would hold up against the grown men—many of which hold the upcoming 40 spots in the Top 50—from the start, and his rookie year showed the hurdles he still has to climb physically.

Given the other Pelicans in the frontcourt, mainly Ryan Anderson and Jason Smith, Davis probably is the most versatile in regards to being able to guard both post positions. But how effective against each one at this stage in his career is something he still must prove.

We’d be remiss in overlooking the fact that he’s really only played at this height for just over three years, and could still be getting comfortable with his role on the court as well as the one coach Monty Williams wants him to fit.

Davis averaged 13.5 points on 52 percent shooting, a hair over 8 boards and close to 2 blocks per game during his rookie season, in which he missed 18 games due to injury. Those are encouraging numbers considering he won’t turn 21 until March, and is still developing physically.

Assuming everyone stays healthy this season, it’s as safe a bet as any that Davis will make another stride toward improvement—numbers-wise and in terms of his presence on the court—as there won’t be much pressure on him to produce offensively.

How Jrue Holiday, Eric Gordon, Tyreke Evans and Austin Rivers can play off each other remains to be seen, but as long as Davis is on the court with any combination of the guards, he will get plenty of opportunities to score just by running with them in transition or making himself available when one of them drives and engages a couple defenders in the half-court.

Davis might not be at the point of being a post who the Pelicans can jam the ball into on the block every possession and expect him to get a bucket or make a good pass—and he may never be (true back-to-the-basket bigs have followed the same trend as CDs)—but his ability to run and beat most big guys down the court every possession will aid the Pelicans’ cause. It’s also safe to assume he’s been polishing his 15-17 footer, and if he can knock that in with consistency off pick and pops or catch-and-shoots, it will make him even more dangerous.

Entering his second season, it’s hard to define Davis’ position on the court as he is part of the wave of hybrid players in the League. The fact he can do a bunch of things well could be negated if he can’t do one thing real well night-in and night-out.  The bar is set higher for a No. 1 overall pick.

The obvious aspect of the game where he’s most likely to show that consistency earliest is on defense. With a year under his belt, perhaps the game will have slowed down for him and he will be more comfortable with how he can excel on the defensive end as he did during his one year in college. Make no mistake, his potential as a game-changing defender, shot-blocker and rebounder is what had college coaches in the summer of 2010, and NBA front office personnel in 2012, salivating.

Davis is just one of many who boast all the attributes that define players with high-ceilings and labeled with ‘star potential.’ When he translates that potential into production on a consistent basis he will begin to re-emerge from the rest of the pack and once again become one of the main attractions in a league stocked with the world’s best players.