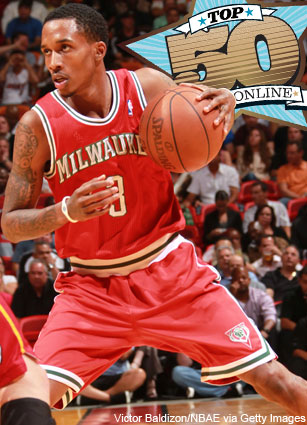 A year ago, a breakout season seemed inevitable for Brandon Jennings. He dropped 55 on Golden State in just his seventh career game, breaking Kareem Abdul-Jabbar’s Milwaukee team rookie record. He started all 82 games as a rook, helped lead the Bucks to a post-season berth and showcased his unique combo of eye-popping speed and impossible creativity. The whispers of his

Iverson-lite handle and Nash-like vision dismissed as exaggeration in his high school years were suddenly—shockingly to everyone but Jennings himself—a reality.

Early returns on his sophomore campaign were good—real good. In October, Jennings messed around and got a triple-double against the Bobcats, and through December, he was averaging 18.7 ppg. Over his first season-and-a-half in the L, Jennings led the Bucks in scoring, assists, steals, and games played. And then, it happened. Compton’s finest broke his foot on an awkward fall against the Spurs ten days before Christmas, sidelining him for 19 games and putting the brakes on his hot start.

Jennings returned a month later but without the same spark. His overall production dipped; he finished the year averaging fewer than five assists per contest. Milwaukee fizzled and missed the Playoffs, unable to catch a young Pacers team that locked down the eight-seed in the East despite finishing eight games below .500.

With a damning injury and an uninspiring team around him (Oscar Robertson himself wouldn’t average five assists a game if he surveyed the floor only to find Corey Maggette, Drew Gooden and John Salmons all yelling “ball!”), Jennings did little to build on a promising start to his NBA career. Which is hard to admit in print, since the nifty lefty is such a genuine, lovable character.

From the moment he made his fashionably late entrance at the 2009 Draft four picks after his name was called, he’s been one of the most fun, funny, approachable dudes in the game. He’s got California love, East Coast grit, and an Italian vocabulary to boot. If this were a list of the NBA’s “coolest” players, he’d rank in the top 10, easy.

But cool doesn’t heal broken bones, doesn’t win games or Playoff series. The end to a disappointing season for Jennings left us to wonder when next we might see the flashes he teased us with in his rookie season, and to cringe at the possibility of his ungodly amount of raw talent wasting away on a team with an annual reservation on the Playoff bubble.

In true form, Jennings didn’t give us the time to mull over such questions. Instead, he had himself one hell of a summer. Etch Jennings on the Mount Rushmore of the 2011 summer circuit next to Kevin Durant and John Wall. Up and down both coasts, and everywhere in between, Jennings has put on for his home city of Los Angeles, matching media darling Durant on both trash talk and point totals. He went for 51 in his Goodman League debut (KD’s backyard) and hung a casual 81-spot in a Long Beach charity game.

Jennings has put his game on display for whoever will watch, against any opponent. He’s shown unprecedented levels of strength, as smooth a jumper as ever and the pre-injury fearlessness that had him in All-Star discussions in late 2010.

If the third year of a point guard’s career is his most important, or most telling, then Jennings has gotten started early. And if his summer is any indication of where he’s headed, we ought to clear the runway for where he’s likely to land on next year’s list.

Few pros have a comparable collection of “holy shit” highlights that don’t end in dunks. Tantalizing to watch, a nightmare to guard and a Hollywood smile, Jennings is a potential International superstar in the making, given his Euro connections. Oh, and he turned 22 on Friday.

His slide in our ranks is temporary, and any concern over his second year comes only from knowing just how good this kid can be, the past few months the evidence. We all want more from (and for) Brandon, and without a doubt, he wants more, too. This season, he delivers.