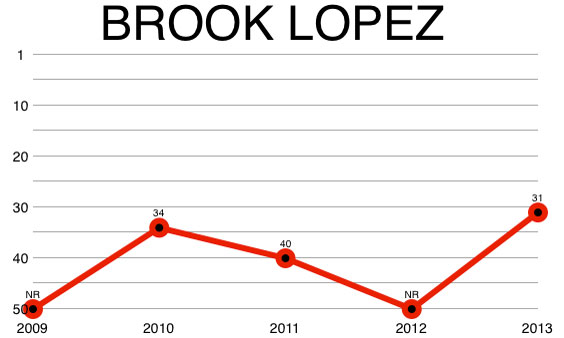 There are some guys in the League who everybody loves to pick on. Russell Westbrook shoots too much. Dwight Howard is past his prime. Tim Duncan is boring.

We sure about all of that?

Last season, the Nets five-man lineup featuring Lopez, Deron Williams, Joe Johnson, Gerald Wallace and Reggie Evans rebounded better than any group not stationed in Oklahoma City, Indiana, Portland, Denver or L.A. (Clippers). Evans’ psychotic work on the glass had plenty to do with that, but Lopez’s rebound rates sat right in line with upper echelon bigs like David West and Marc Gasol.

No, Lopez isn’t a great rebounder. But his numbers have taken a hit while playing next to Kris Humphries and Evans over the past few seasons—both exceptionally hyperactive boarders. He hung in there against the Bulls’ loaded frontcourt in the postseason, pulling down about 7.5 rebounds and swatting 3 shots per game during the seven-game set, and his Nets out-rebounded Chicago overall. He’s not a defensive force or a monster on the glass, but he’s good enough.

The Thunder crumbled without Russell Westbrook’s offense in the Playoffs. Howard led the NBA in boards per game last season. Duncan might be the greatest power forward we’ve ever seen. Lopez was the League’s only player to score 1,400 points, grab 500 rebounds and block 150 shots last year. Moving on.

We all know the League is prioritizing speed, athleticism and threes over bangers and back-to-the-basket scorers. That shift makes a guy like Lopez, a true 7-footer, one of the L’s most valuable pieces. Some teams are forced to effectively play four-on-five when they have the ball because of their offensively inept centers (I’m lookin’ at you, Kendrick Perkins). Some teams opt for a floor-stretcher who can’t hold his own in the post (enjoy New York, Andrea Bargnani!). The Nets have a dual threat at center, something most teams in the League just don’t have.

Lopez’s versatility should be on full display this season, as the Nets have, finally, placed the right guys around him. Playing alongside Kevin Garnett, Lopez will be able to live under the hoop while KG stretches the floor with his elite mid-range game. Lopez’s own ability to knock down perimeter shots (39 percent from mid-range was about on par with Duncan last season) will open the lane for Williams. With Johnson and Paul Pierce lined up on the wings, it’s hard to imagine a better five-man unit to run a simple drive-and-kick with.

In past years, Lopez’s offensive game has been slowed by his frontcourt mates’ offensive shortcomings—Humphries, Evans, Wallace, you name it. In Round 1 against Chicago, the Bulls stacked the paint against Williams and Lopez, daring somebody else to beat them. Nobody rose to the challenge. Throughout the seven games against Chicago, the Nets shot below 32 percent from downtown, a number that would have bested only the TWolves during the regular season.

That won’t be the case against the newer-look Nets, as a double-team on Lopez will leave one of Williams, Johnson, Pierce or Garnett all alone. That’ll translate to more man defense on the Nets’ center, and, ultimately, lots more buckets.

On the other end of the floor, Garnett should help Lopez in a big way, mainly as an intimidator. I’m not sure many players were afraid to drive against the likes of Humphries and Andray Blatche last season.

People love to hate on Lopez. His flaws are pointed to more often than his strengths, but I think this will be the season that changes. A year ago, expectations were set too high for a Nets team that had a loud offseason but failed to address major issues—floor spacing and depth, to name two. Brooklyn figures to be a far more balanced team this time around, and the high expectations are deserved.

The Nets are in the discussion with Indiana, Chicago, New York and Miami as teams with a shot to win the East. But they could easily be the worst team of the bunch—Pierce and Garnett are probably 20-25 minute guys who will take some games off, and even Johnson is entering his age-32 season. For the Nets to get where they want to go, they’ll need Lopez to establish himself as a true force on both ends of the floor. He’s well on his way.