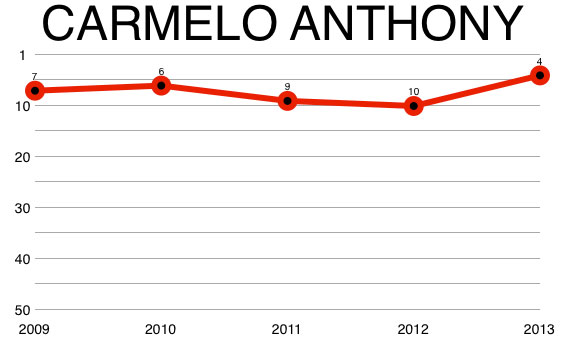 Carmelo Anthony, top 4! If Kobe’s magic blood renewal is a scam, Durant needed Westbrook more than we thought, and the playoff minutes finally chip away at LeBron, then that would mean… no let’s not go there… yet.

This is a big turn around for someone who was beginning to turn a vast segment of the basketball public off. A little over a year ago there was a belief that the Knicks were a better team with Melo away from the team, injured. He was supposed to give up his kingdom to Linsanity, which now feels like some weird fantasy that couldn’t have happened. Instead he took control of the Knicks organization and raised the stakes.

Last season Melo took his game to a new level, leading the League in scoring, carrying the Knicks to the forgotten land for them—the second round of the Playoffs. He was unstoppable for weeks at a time, throwing up 40-point games in his sleep. Melo was the heart of a 13-game winning streak and even had some Knicks fans believing their team could be a threat to Miami. He was getting heavy MVP buzz early in the year as he led a Knicks team that jacked threes at a record clip, took care of the ball, and played solid defense.

He also missed time with all kinds of mysterious injury treatments and got caught up in some silly controversies, whether it was the Honey Nut Cheerios thing or the usual accusations of ball hogging. The most amazing thing about Carmelo is that the smile is still there. Through all of the business and the controversies, the hand-wringing and the judgment, he still goes through life with a smile on his face. That probably annoys some people who want to use that as evidence he doesn’t care. Not true.

Melo’s latest foray into the news is that he is going to do the financially savvy thing and opt out of his contract to test the market. Will we look at him differently when he’s the highest paid player in the League? Probably. People will use his cap-killing salary to bring him down, but let’s enjoy what Melo is at the moment—an electric performer (most nights) who can carry a team singlehandedly and injured on a playoff run.

By the time the Playoffs rolled around last year, Melo was the one-man Broadway show he’s always wanted to be. The bad JR Smith made an appearance, his Hall of Fame PG went 10 playoff games without scoring a single point to close out his career (!!!), Tyson Chandler and Amar’e were “ineffective,” Felton and Shump had some moments, but Melo was carrying a decaying squad on his back. If he could have finished that dunk over Roy Hibbert, it might have carried the Knicks to the conference finals (leap of faith, but I’m building a case here). There really aren’t that many guys you can stick on a team and feel like their presence puts you in the second round. Melo wasn’t always that guy, but he may be now. Playing for that free-agent contract this year, you’d think he’ll be insanely motivated. Next year all bets are off. And such is the up-and-down nature of Carmelo.

He’d dropped all the way down to No. 10 last year. I’ve been writing the Melo Top 50 piece for three years now, because I teach at a NYC high school and my students LOVE the man. Once again, I defer to one of my students for the final words on the write-up.

Carmelo Kiyan Anthony, The Knight in shining armor to Knick Fans Worldwide. Last year he arguably had his best season. He led the NBA in points and led his team to the number 2 seed in the East. Not to mention, he actually played some DEFENSE.

I’ve heard it all as a Melo supporter, from “He just watches his assignments score” to “He can’t guard a soda machine.” But this past season he actually played some D. Yeah you can say he mainly guarded power forwards last year, but the man played D. And on the other end of the court Melo performed on a level beyond comprehension. He may have shot the ball a little too much last season, but that extra shooting crowned him as the scoring champion of the 2012-13 NBA season. He can beat the defender in EVERY way. He is just a Swiss Army Knife filled with offensive weapons.

A prime example of The Offensive Craftsmanship of Carmelo Anthony is when he tied his career high against a star-less Miami Heat. Yeah you can say, “LeBron wasn’t there,” but when the Heat play the Knicks Shane Battier has to guard Melo, which he did. And he got completely decimated. Michael Jordan once said, “I’ve always believed that if you put in the work, the results will come.” And Melo is working to a Championship, and he’s getting closer and closer and when he works a little harder he can be an NBA Champion and Number #1 on the SLAM Magazine Top 50 Countdown.