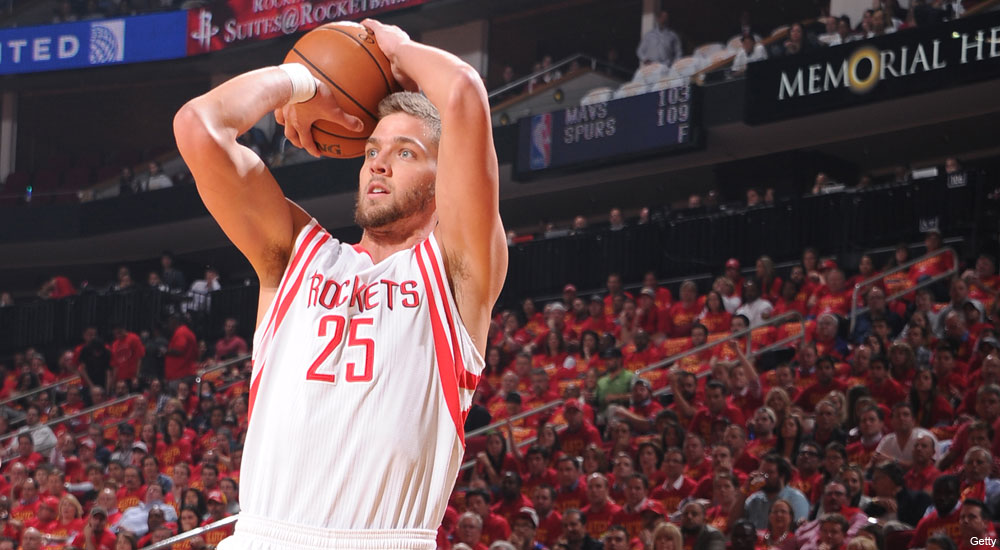 Dallas and Houston have both given Chandler Parsons the necessary motivation to live up to his No. 50 ranking.

The Rockets could have kept the swingman one more season for less than $1 million, and Parsons would have then become an unrestricted free agent in the summer of 2015. Houston didn’t pick up his bargain of an option, making him a restricted free agent. The Rockets, though, still had his Bird rights, which meant proactive and innovative general manager Daryl Morey could have tacked on a new contract for Parsons without affecting the team’s salary cap. With Chris Bosh and Carmelo Anthony on the market at the time, that seemed to be a part of the plan—add Bosh (or Melo), then tack on Parsons afterward to create the next superteam. It made perfect sense…

Until Bosh and Melo stayed home.

Morey has been known to go after the “big fish” every summer, so if he had locked up Parsons to a long-term contract, he would have been committing to Parsons and the current core while their championship window stays briefly open. No Rajon Rondo. No Goran Dragic.

Since the Mavs stepped in during the process and came to an agreement with Parsons on a lucrative contact, Morey decided to let his forward take a trip up I-45 to Dallas. He was telling his now former forward he wasn’t a big enough star to implement into his long-term plan.

Mark Cuban and the Mavs, on the other hand, have taken the complete opposite approach. Thanks to Dirk Nowitzki and Devin Harris both taking hometown discounts in their recent contracts, the Mavericks management had more room to work with in off-season endeavors. They snagged Parsons with a three-year, $46 million offer sheet that included plenty of additional elements (player option, trade kicker) in Parsons’ favor.

So yes, the Mavs overpaid for Parsons and have stuck him right in the middle of their plan to give Dirk one more run at a ring…but now the kid who has constantly had a chip on his shoulder from the moment he fell all the way to the late second round in the 2011 NBA Draft has a chance to show he is deserving of this type of pay and responsibility. (Also—if you take a step back and realize the Mavs are paying about $23 million for both Dirk and Parsons next season, it doesn’t sound as bad.)

Just like these rankings are attempting to project and effectively order how the top 50 NBA players will perform next season, the Mavs are paying for what Parsons could potentially be. They are betting he will expand his game even further after averaging 16.6 ppg, 5.5 rpg and 4.0 apg for a playoff team that already had James Harden and Dwight Howard requiring the ball to be in their hands. A lot. (Parsons had a usage rate right below Evan Fournier and Anthony Bennett. This will undoubtedly increase in Dallas.)

Aside from the scoring, rebounding and passing, Parsons will be expected to join forces with Al-Farouq Aminu to try and replace what the team lost in Shawn Marion. Dallas has a three-headed, undersized monster at point guard (Jameer Nelson, Raymond Felton, Devin Harris) and a starting shooting guard (Monta Ellis) who won’t be able to keep opposing guards from penetrating into the teeth of the defense.

But Parsons should be up to the challenge if he sustains his defensive success from just a season ago. The former Florida Gator allowed a respectable 0.74 points per possession when guarding the pick-and-roll while limiting shooters to 35.2 percent from the field, according to Synergy Sports. Versatility again becomes the explanation for these numbers since Parsons has the length to guard forwards and quickness to keep up with guards. Parsons should be able to fit right into Carlisle’s fluid defense that requires his players to incessantly have active hands and never stop moving.

More than anything Chandler brings on the offensive end of the court, this defensive proficiency will be the key to Chandler’s success in Dallas. The Mavs want to build off last year’s seven-game first round series against the Spurs, meaning they must establish more intense, consistent defense. It is unacceptable for any NBA playoff team to allow their opponent to pour on 68 points in the first half of a pivotal Game 7.

Tyson Chandler was the first, blatant answer to this issue, providing a nostalgic defensive anchor. The team’s other Chandler might not be nationally recognized for his perimeter defense, but he certainly has the potential to be more a part of the solution than the problem.

While Parsons’ versatility on both ends of the floor certainly should be considered one of his strengths, it might also end up being what spreads him too thin. With the Mavs roster practically set for the upcoming season, it looks as if Parsons will need to fill part of the roles Jose Calderon (stretching the floor), Marion (perimeter defense) and Vince Carter (ball-handling and creating offense) held last season. He can certainly do all of these things on the court, and that’s why Cuban shelled out so much money for him. But an inundation of responsibilities could become an overwhelming burden for someone trying to learn his first new system since entering the League and trying to find the right chemistry with two stars who already meshed last season.

Luckily for Parsons, he has a head coach who is one of the best at getting the most out of his players. Rick Carlisle hones in on his players’ strengths and then finds a specific role for each of them, consequently enhancing the strength of all.

Will Parsons end up as a primarily “3-and-D” wing? Will he frequently find himself handling the ball at the top of the key, running pick-and-rolls with Chandler and Dirk? Will he take on a role similar to Andre Iguodala and do a little bit of everything?

Regardless of the role Parsons ends up settling into, he has the chance to once again play with a chip on his shoulder, act as a stopgap for many of his team’s holes and make the Mavericks a top team in the hyper-competitive West.