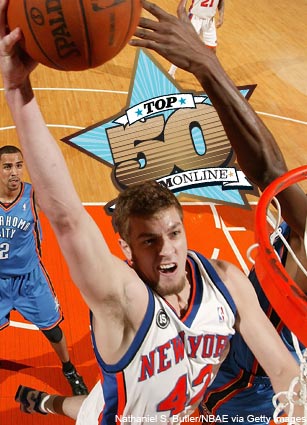 “With the 30th pick in the 2005 NBA Draft, the New York Knicks select David Lee,” NBA Commissioner David Stern stated before handing the microphone off to Deputy Commissioner Adam Silver to announce the second round.

After peaking his senior year in college at Florida with averages of 13.6 points and 9 rebounds per game, almost every NBA General Manager saw Lee as any team’s average hustle player who would outwork opponents on the glass and score on the interior. From the day Lee was drafted there was some uncertainty amongst fans as to whether the Knicks took the best player th

The player Isaiah Thomas (probably his best move as a GM) drafted in the summer of ’05 was a modest fellow who was expected to come into the League and be a solid role player off the bench by playing tough basketball. He certainly wasn’t expected to blossom into a consistent offensive threat or one of the League’s most steady power forwards, yet that is exactly what Lee has done since coming into the NBA five seasons ago.

His path to stardom hasn’t been the most conventional, but it has been an effective one. His first season in New York under head coach Larry Brown’s notoriously hard-on-rookies attitude combined with a team that featured chemistry-killers Stephon Marbury and Steve Francis were troubling times in NY and it was tough for Lee to find playing time, averaging just 17 minutes per game but showing flashes of being the type of player fans want on their team—he always hustled and never seemed to let up on any play, something NY Knicks fans were especially hungry for at the time and endeared themselves to.

The next chapter of Lee’s career was the breakout, or the “we believe,” era of his career. He played more minutes in these seasons and averaged 10.8 points and 9.1 rebounds per game in his much increased 29 minutes per game under coach Isaiah Thomas. During this period, Lee began to show flashes on the offensive end, hitting 15-footers (still looked somewhat awkward doing so), taking the ball strong to the rim, and still always playing with that constant night-in, night-out effort each time he stepped on the floor. During this time, David Lee was coming off the bench and at this point Knicks fans were practically begging for him to see even more PT.

The ‘08-09 and ‘09-10 seasons have been something else for the power forward, as he undeniably picked up an edge to his game while playing under the bright lights at MSG every night. He started to look much more comfortable and each time people expected his production to slow down, it simply got better.

Sure, he was playing in Mike D’Antoni’s signature system that doesn’t exactly concentrate on the defensive end. But dude has done exactly what was asked of him in the situation that he was placed in and there’s nothing more you can ask of somebody. The past few seasons Lee has noticeably improved his back to the basket game, pick-and-roll game and has become a more than reliable threat from as far out as 20 feet, especially near the top of the key.

While playing an average 36 minutes a night for the past two seasons Lee has averaged 18 points and 11.7 boards, in the process helping to keep the Knicks from slipping all the way to the cellar of the Eastern Conference, but most importantly giving Knicks fans somebody that they could count on showing up every single day.

Seemingly pushing a “Trade David Lee” button (thanks, Juice) the Knicks shipped David Lee to the Golden State Warriors immediately after they realized that LeBron had Punk’d them. The Warriors offered Lee the money he had earned over the course of his uphill career, a six-year maximum contract worth $80 million.

Heading out west, Lee will have a very similar role—trying to bring a bottom-dwelling franchise back into the thick of things while bringing the same energy and intangibles that he has been bringing for years.

But there is one difference: playing with the Warriors, Lee will have a rising star at the point guard position in Stephen Curry and another experienced guard in Monta Ellis, both of whom have a lot to prove in their own right. While Curry seeks to prove that he can lead a successful NBA team from the lead guard position and Ellis tries to shed his label of being a selfish scorer, David Lee could be the guy to bring it all together out in the sunshine state for the Warriors.

The production is going to be there. He’s going to do the dirty work and score some points, but the real question is whether he can impact a team enough to get to that next level and become a winning franchise. After all, shouldn’t that be why the Warriors just laid out $80 million on the table for him?