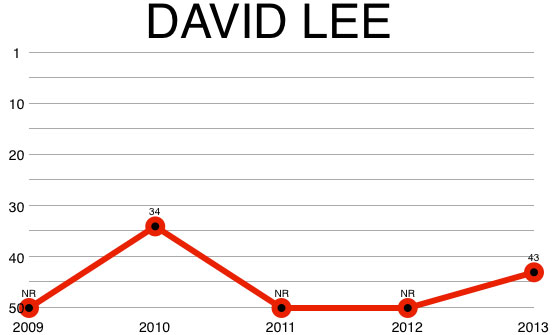 The final name called during the first round of the 2005 NBA Draft was David Lee.

Despite possessing the size and athleticism necessary for success at the next level, questions surrounded Lee’s desire to excel as a rebounder. Some politely suggested the Florida product would struggle inside, while others came out and labeled him soft.

During his second season with the New York Knicks, however, Lee would begin a career-long process of proving his critics wrong. He came off the bench to average a double-double with 10.7 points and 10.4 rebounds in ‘06-07, before emerging as an All-Star in 2010.

The following summer, Lee cashed in the 20.2 points and 11.7 rebounds he had just averaged in New York by inking a deal worth $79.5 million to become a member of the Golden State Warriors in a sign-and-trade.

On the strength of that payday alone, the kid from St. Louis had officially arrived. Lee had earned a spot among the NBA’s elite and would be compensated accordingly for the next six seasons—no matter how many games the Warriors won or not.

Dismissing the comfort of his new contract, Lee continued to work upon arrival in Oakland. He began the Golden State chapter of his career with goals of doing more than cashing checks and filling box scores. Through max-effort and consistency, Lee would not only live up to All-Star expectations but also help establish a culture of winning in the Bay Area.

During the five years he spent in New York, the Knicks posted a combined winning percentage of .341. Prior to his arrival in Golden State, the Warriors had similarly totaled only 55 wins in the previous two seasons. After elevating his game as an individual, though, Lee would go on to elevate the spirit of his new organization.

As a starter for 209 regular-season games in Golden State, he’s since posted 120 double-doubles. This past season, Lee led the NBA in that category with 56. The next closest player was Dwight Howard, who was eight double-doubles off Lee’s pace.

In the process, Lee would also average 10 or more rebounds (11.2) for the fourth time in his career, to go along with scoring 18.5 points on 51.9 percent shooting. More importantly, for the first time as a professional, the individual numbers Lee posted were also highlighted by a trip to the Playoffs.

While collecting 47 wins, the Warriors finished as the 6-seed out West before advancing to the conference semifinals. The idea of winning basketball that began with Lee’s arrival in Golden State has quickly morphed into goals of conference championships ever since.

Despite all he’s accomplished, though, the 30-year-old Lee may very well enter the ’13-14 campaign being slept on more than any player whose ever averaged at least 16.5 points and 9.6 rebounds for three consecutive years.

Coming off a hip injury that limited Lee to appearing in only six of the Warriors 12 playoff games, he seems to be lost in the headlines.

Superstar teammate Stephen Curry will continue to generate the majority of attention in Golden State for good reason. There’s also plenty of reasons to be excited about the newly acquired Andre Iguodala, the emergence of Klay Thompson and demonstrated potential of Harrison Barnes.

But at the same time, it’s also important to remember where this Bay Area run began before projecting it forward. This new culture of success started in earnest with an underrated prospect who went on to make his second trip to the All-Star game last season.

The same player who will prove more critical than most people expect as his team attempts to further advance in the Playoffs this year.

Working with skills coach Drew Hanlen this summer, Lee has focused on improving his jump shot along with his defensive footwork. According to Hanlen, Lee has also trimmed down to eight percent body fat with training camp set to open later this month.

After undergoing surgery in May to repair his injured hip, the Warriors big man also told the San Jose Mercury News recently that he’s back to feeling 100 percent.

“No ill effects whatsoever,” Lee said, with respect to the injury. “I actually feel a lot better moving around than I did even last year at this time.”

If that holds true, expect the player whose proven to be much more than a walking double-double to advance the winning culture he helped build to new heights in ’13-14.