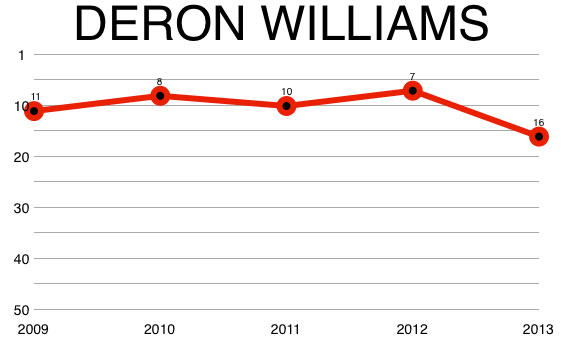 I was stunned by the bile I was keeping inside as a kid, energy that I channeled into sports and being competitive in the classroom, except at the end of the year when I would rate my classmates like a price guide, and then also the bile that came back. The answer was equilibrium, as much as it stung, the idea of one being drunk on writing.

One of the things that makes a yearbook interesting is how students, at times, play follow the leader—like a comment that creates a new perception about the person whose yearbook it is (inside of their own head). It’s elementary school Psychology 101, searing life commentary before the twists and turns of the internet. As a kid, I fired dodgeballs and ran with footballs. As an adolescent, I was likened to a duck.

Since I spent most of last year around Deron Williams and friends (see how DWill suddenly looks like the leader?), I decided to try and bridge those gaps. Williams is a Steelers fan, so I combined STEEL-CURTAIN-ESQUE signatures with deeply imagined (but hopefully balanced, resonant and thoughtful) messages from his hybrid homies in the L.

Regarding the fonts: regular is The Truth according to this post in time; bold is bold, somewhat in the past perhaps; and italics both futuristic and somewhere in between.

You might not have been Top 50 for much of last season, but you were Top 3-5 post-All-Star, so SLAM will probably rank you somewhere between 16-22 in their annual Top 50. Just letting you know. — Keith Ramon Bogans

I lived in Greece, too. Ghost wrote a column. For SLAM. Hope you’re well. The unexamined defense is not worth improving. — J-Chill

You might as well call me Oprah’s book club. Best of luck this year. — Mr. Jerry Stackhouse

I suppose I have to learn how to translate Kevin Garnett? — Mason Plumlee

Hey boss—I figured Plumlee would be bringing you your plums or apples or oranges or grapefruits or whatever this year—you still want me to get you the Daily News? Or you wanna switch it up? Times, Post, Newsday, Star Ledger, Record, AP printouts, or even the Brooklyn Eagle—lemme know. I mean, if MarShon helped out for parts of two seasons. — Tyshawn

Man, DWill, I been thinkin’: Since we family men and stuff like that, we family men. Kids the most important. Know what I’m sayin’? — Reg

You’re not from Chicago, but you can still make ‘illa wafers as long as you’re not rockin’ loafers. — Shaun Livingston

PG—thanks for continuing to having my back. #breakfastclub? — Dray

You know, since I watch lots of NBA TV, I can tell you that I definitely see the Rick Barry in you. Should be interesting now that I have a new coach who’s used to doing more with less. Have a summer. — MarShon

Remember: If you ever need help on defense, or with a joking matter, I’ll be there to make sure you’re defending my sense of humor. — Coach Lawrence

From the passing to the present, how you move the ball, in many ways, defines what we do here. If it’s successful, it’s your playlist. But the stature of that success lies somewhere between Manute and Muggsy. — Coach Kidd

I look forward to working with you. — Alan Anderson

You and I can do better next season, right? — Mirza Music

Running and cunning. — Marko Jaric (My contribution to this Nets season. See how I imitated Clyde Frazier?)

Now that you’ve had it your way, are you ready for phase 2? — General Manager Billy King

I still don’t know where in America you can jack someone’s shorts up. — Phase 2

The ’13-14 Brooklyn Nets: From Soft Serve to Self Serve in One Linear Mess Hall. ‘Come on everybody, let’s do the conga’. (Mr. Cory Booker, IS THAT SLOGAN OK WITH YOU?) — Marty Markowitz

For the record, the author interviewed me when he was 17—for The Record. Predictably, the work was amateur in quality. — Jet