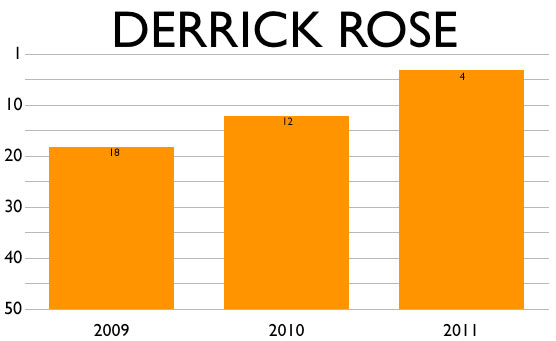 The last time I saw Derrick Rose, he was fresh off addressing reporters after the Miami Heat beat the Chicago Bulls in stunning fashion in Game 5 of the Eastern Conference Finals at the United Center.

After making his post-game statements, DRose walked away from the lectern in the makeshift press room underneath the UC and a few writers, myself included, congratulated him on what really was a successful season and just showed our respect and appreciation for the amount of basketball enjoyment he provided throughout the year.

Derrick thanked us and let us know that he appreciated it, but as hard as he tried to mask it, he just couldn’t hide what was on his face. We all saw it.

After being named a starter in the ASG for the first time in his career, leading his squad to a +21 in the win column from the previous two seasons, and finishing with the best record in the NBA, taking home the MVP and leading the Bulls to the Eastern Conference Finals where they faced off against the team that everybody loves to hate, Chicago wins the first game by 21 points and after that? Curtains.

All things considered, I’m sure our gesture wasn’t lost on him, but in that specific moment in time. DRose wasn’t trying to hear it. His season and championship dreams just crashed and burned. Not only was he disappointed, he was PO’d, major.

But you know what? That’s exactly what you want from a guy who is the face of the franchise, the unquestioned leader of his team and the only one carrying the weight of an entire city stuck in a 13-year (and counting) Championship drought, on his back.

That last line might sound like a heavy burden to most, but DRose has already surpassed most, if not all, expectations as a player to this point, and he never shrinks in the moment nor backs down from a challenge. Like his signature drives to the rim, he attacks ferociously.

This, combined with his off-court demeanor, makes him without question one of the most unique NBA superstars any of us has ever seen. And while I’m aware those words tend to get tossed around a lot in basketball discussions these days, it really does apply here.

Derrick Rose is a hyper-competitive athlete, yet he humbly deflects any individual attention and praise that he receives and attributes his success to the contributions and help from his teammates. It’s never “I” with him, always “we.”

Strong and powerful on the court—sometimes even vociferous—once the game is over, DRose is quietly unassuming to the point you forget he’s even in the room. He never commands attention of his own volition. That’s very atypical of an NBA superstar.

And if you need any more evidence as to his uniqueness, look no further than his history on SLAMonline’s Top 50:

Going into the NBA as the No. 1 pick in the 2008 NBA Draft and coming off a sensational single season at Memphis where he was coached by John Calipari, Rose took the Tigers all the way to the National Championship game against the Kansas Jayhawks and damn near won it… allegedly. But in spite of all that, he didn’t even make the cut on the Top 50 as a rookie.

(*Side Note* When John Wall—another Coach Cal disciple and former No. 1 pick—came into the League as a rookie fresh off a freshman campaign at Kentucky where he led the Wildcats to within a game of the Final Four in 2010, he somehow managed to check in at No. 47 on the Top 50 ahead of Jesus Shuttlesworth, Gilbert “I Bring Guns To” Arenas and Lamar Kardashian. Go figure.)

In 2009, riding high off a ROY campaign and his play in that epic first-round Playoff series against the Boston Celtics, Rose went from unranked to No. 18 on the Top 50 despite many objections from SLAMonline’s passionate (and highly opinionated) readership.

A year later in 2010, Rose jumped six spots to No. 12 and now, after a year that nobody saw coming, Rose jumps eight spots and stands—in our collective opinions—as a top-five player in the League, checking in at No. 4 on SLAMonline’s Top 50, entering just his fourth season as a pro.

Look, we don’t pretend to be experts on this stuff, but to go from unranked to 18th to 12th and now fourth is pretty special. That kind of thing doesn’t happen. And it’s not like we decided to just give him the spot, he did actually earn it. He played his way in and last season was certainly no fluke.

Keep in mind what the Bulls accomplished while missing Joakim Noah and Carlos Boozer for good portions of the year. The ship could’ve easily sank, and despite basketball being a team game, DRose kept everything afloat. This is not debatable. So whenever the season does start, Chicago is going to be there (read: have a legitimate shot at a title) and Rose’s individual performance and contributions will be the primary reason why.

And if for some reason you’re still upset with the ranking, know this: Whether or not you feel a guy is deserving, an MVP winner in any professional league—from basketball to checkers—should automatically get a top-five spot in any subjective player ranking just off GP. Furthermore, said player should be given a chance to play his way out of the position because if he isn’t deserving or if his performance was an anomaly then it’ll show. Everything comes out in the wash. This is common sense.

So debate amongst yourselves and/or question the credibility of this list if you must. But know that at SLAMonline, game recognize game ’round here.