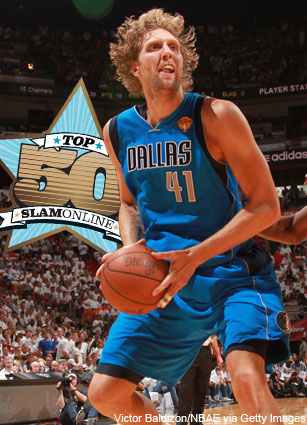 We waited a long time for this Dirk Nowitzki. It’s been 13 years since the Dallas Mavericks used their 9th pick in the 1998 NBA Draft on a gangly, 7-footer from Wurzburg, Germany that captivated our basketball imaginations with an unprecedented ability to stroke it from deep, from 20, from 15, hell, from any-friggin’-where on the court, all while making it look like taking candy from a baby. This kid has the goods, we thought. So we endured. We shrugged off his romp through the Paul Mitchell hairstyle catalog. He’s European, that’s how they wear their hair, we explained. We let him off the hook for those early exits in the Playoffs because it was clear he didn’t have the help he needed to get over the hump. With the right pieces around him, he’ll get it done, we said.

Eight seasons in, it looked like our wait was over. Dirk started stomping with the big dogs and put the Mavs on his back all the way to the 2006 NBA Finals, taking a two-game lead in the series over Miami. Dallas has this in the bag, we thought.

But then, things fell apart like a soup sandwich. Dirk and Co. served up a meltdown for the ages. Four L’s in a row. It was Buffalo Bills-esque. And Dirk? He was Jim Kelly 2.0.  Persona non grata.

After that epic collapse, we hammered the German like he was a railroad spike. Worse, we did it with pingy, two-word jabs:

It was open season on Dirk’s heart and mettle, so much so, that even Dwyane Wade took a swipe:

“He wasn’t the leader he’s supposed to be in the closing moments.”

So how did Dirk respond? He went back to the basics with trusted advisor/shooting coach/Yoda Holger Geschwinder and beasted his way to a monster MVP campaign in ’07. Dirkus Maximus was ready for redemption, we thought.

But then The Golden State Warriors happened. Ousted in the first round, Dirk was deflated, which was counterproductive, since we beat him up for his lack of clutchness repeatedly like he was a piñata draped in lederhosen. And rightfully so. He who wears the crown…

Fast forward to June 2011. It had been 13 years and change and yet, here we were, still waiting on Dirk to breakthrough. Difference was, we were no longer holding our breath. There were too many other superstars to root for: Kobe, Durant, ‘Melo, CP3, Wade, LeBron. It was never gonna happen for Dallas, not with their one-star constructed band of outcasts. Sure, they stayed winning in the regular season, but they’d never be “Charlie Sheen” in the postseason. We were sure of it.

But Mark Cuban knew. Jason Terry knew. Tyson Chandler knew. Dirk had been concocting unblockable, one-legged J’s with Geschwinder.  He’d been perfecting his iso game, his toughness, his clutch gene. He’d been demanding the ball in crunch time and delivering like FedEx. He’d developed into a bona fide leader. He’d finally become that Dirk. They all knew that we’d see it and believe. Again.

The final number was 582. Mathematically, 582 points doesn’t seem like much, but all those step-back, fadeaway jumpers, long balls from behind the arc and the 175 ice water free throws Dirk dropped on the Blazers, the Lakers, the Thunder and the Heat on the road to redemption were nothing short of extraordinary.

Those 24 straight freebies he drained on OKC in Game 2 of the Western Conference Finals after he had every Thunder defender thrown at him futility jumping like schizoid Jack-in-the-Boxes to thwart his J? Ridiculous. The way he drained shot after shot with OKC’s collective hands across America in his face? He couldn’t stop, wouldn’t stop. And that 40-point outburst to fuel a furious 15-point comeback in the waning five minutes of Game 4 that included the up and under scoop shot that was a la Cirque du Soleil? Are you kidding me? And Game 2 of the NBA Finals? You could practically hear the theme song from “Rocky” as Dirk mounted an unforgettable comeback after “celebration gate” for the W, scoring the final nine points with 2:14 minutes remaining. That lefty spin move past Chris Bosh to the cup to seal the deal was better than any alley-oop or tomahawk dunk we’d seen all year. And just when you thought he couldn’t do it again, he went righty on Udonis Haslem for the deuce to win Game 4. The fact that he did all this with a torn tendon in his left middle finger and no legitimate All-Star sidekick will forever cement his legend in NBA Finals lore.

It was one man against the three-headed monster. Eff Jim Kelly, Dirk was now David, who’d slain Goliath.

Advantage Dirk. No choke. Not soft. Super clutch. First European to carry his team to a title as the undisputed anchor of said team. And as for being the leader he needed to be in the closing moments? Well, you can ask Wade how he feels about that now.

So after all of his postseason heroics, Dirk only moves up two spots from last year’s rankings to No. 7?

Somehow, the numbers don’t quite add up on that one. Dirk is the champ, the best player on the best team in the world. All roads next season have to go through him. But alas, this is about the upcoming season and what a player’s projected to do. We have no clue as to what Dirk will do for an encore to a perfect title run, but we’ll be right here, locked in, and waiting for another amazing performance.