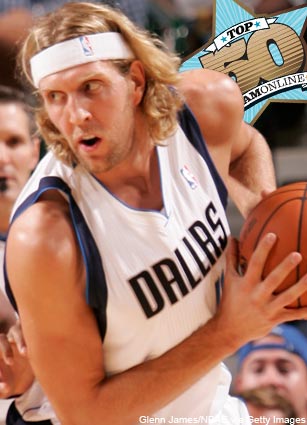 There seems to be much confusion on this Top 50 list regarding who the best power forward is in the NBA today. Is Tim Duncan still one of the best? Sure. Is Tim Duncan the greatest power forward of all time? You can’t argue with the numbers, awards, consistency, defense and the four rings…so it’s quite possible. But is he the best today? Anyone who watches sports and knows about the decline of players with age knows that he is not.

Some of you might say Pau Gasol. An integral part of the last two Lakers’ championships and one of the most skilled big me

n in the game. The best? I’ll say this in Spanish: No.

And then there’s Chris Bosh. He’s not the best PF either, and I could go into detail, but I honestly don’t feel like talking about the Heat anymore.

At a ripe, young age of only 32, Dirk Nowitzki holds the honor going into his 13th season as an NBA pro.

Let me paint a picture for you.

You’re about 6-6. You’re an extremely talented basketball player on both sides of the ball…hell, let’s say you’re one of the best in the world. While warming up for one of your games, you notice the other team has a 7-foot, lanky, European-looking fellow with some wavy blonde hair. Looks kind of soft.

So, after the tip, you take it right to him and score rather easily ’cause, hey, you’re one of the best in the world and his defense, as you guessed, is of no match. “This guy’s a chump…should be a cakewalk,” you think.

Next possession: “What’s going on? Why is the tall, gangly fella bringing the ball up the court?” Well since your own big men are settled in the post, you’re left to guard this German giant on the key. He spots up and swishes a gorgeous three-ball in your eye. “Huh?”

On his next offensive possession, you think you have him covered, guarding him tightly.

He nails another trey as his elbow comes down on your head. Remember? He’s 7-foot. You’re 6-6. You’re tall. He’s really tall.

“OK, OK. Nice Sam Perkins impression. I get it,” you say to yourself. So the next time down, you completely expect Euro-boy to jack up another long ball, but then he pulls a sly pump-fake, dashes around your ass, spins around your power forward and finishes with an easy lay-up. Foul. (He probably makes the foul shot, given that he’s a 7-footer who shoots around 90 percent from the stripe.)

Get the picture yet?

Dirk Nowitzki is one of the most unique, unprecedented players to ever step foot in the League. He has been lighting up the scoreboard for his entire career, always posing such a huge threat to defenses with his interior skills to go along with his incredible shooting range.

And while ‘Irk Nowitzki’ is an accurate diss, his numbers on the boards aren’t terrible. He has 8.5 rebounds for his career and has posted over 9 five times, but is still a defensive liability.

But while you can’t overstate the importance of defense, Dirk’s major flaw will never overshadow all the positive he brings to the game. He’s absolutely lethal shooting from anywhere on the court, but can also drive the lane and finish with authority or finesse.

Nowitzki’s shooting percentages are off the chart for a man of his size, especially since he recorded a career high 42.1 percent from beyond the arc last season. From anyway you look at it, there may never be another player like him. Unprecedented.

And soft he may be, but Dirkus is a durable big guy, which is a rare commodity these days. Since becoming an every-day starter for Dallas in his second year, the most games he’s missed in a season was six in ’01-02. Sorry Portland.

Most importantly though, Dirk always continues to make the Mavericks better. Dallas has amazingly won at least 50 games the last 10 years in a row…and Dirk Nowitzki is always the centerpiece no matter who Mark Cuban and Donnie Nelson bring in. Dirk is the reason that American Airlines Center is always packed and bumpin’, not Mark Cuban.

But because of the Mavericks’ regular season success, a huge blemish remains on Dirk’s ever-growing legacy because of his team’s playoff failures. While posting some fantastic playoff numbers for his career (25.6 points and 10.9 boards…way better than his regular season numbers), he has failed to capture a championship and has only led the Mavs to the Finals once. Many think Dirk is to blame for Dallas not closing out the 2-0 lead over Miami, but Dwyane Wade won that series…Nowitzki didn’t lose it.

Championships are everything in sports though, I’d be lying if I said otherwise. Allen Iverson may be the greatest little men to ever play the game, but his career is slightly tarnished because of his lack of rings. It doesn’t seem right, but that’s just how it is. And until Dirk leads the Mavs to that coveted trophy, he will never be mentioned in the same breath as Tim Duncan for best power forward ever, when all is said and done.

Whether it’s fair or unfair.

Because this West German guy is a marvel. I’ve thought so since the day he came in the League…and year in, year out, he continues to be a top-10 player by anybody’s standards. Watch and cherish the skills…that of Mark Cuban’s greatest asset.