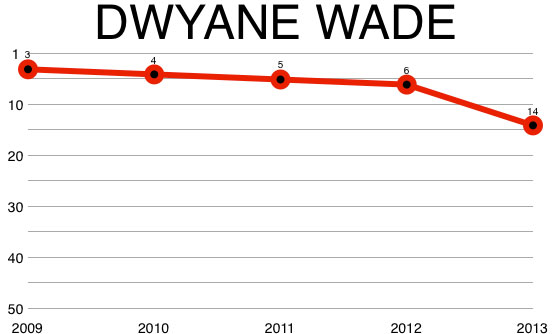 “A cleaner is an individual who is the most competitive person out there that will basically do anything within the rules to get that end result.” — Tim Grover, author, Relentless: From Good to Great to Unstoppable

The Dwyane Wade note posted to Instagram—a 23-word message to Kevin Durant that has garnered over 11,000 comments and will surely one day be auctioned off by Christie’s—appeared to have two different sets of handwriting in the message. As the one and only @Basquiatball pointed out via twitter, the mystery behind the “immaculate” hand writing sample has been lost amid the Wade-KD cypher. What isn’t lost is the question put forth by the discussion: Is DWade a top-10 NBA player for the ‘13-14 season? Clearly, the SLAM collective does not think so. Young bucks have risen up and DWade comes in at No. 14 on the SLAM Top 50, down from the No. 6 spot last year.

How did we get here?

Injuries. Wade had another exceptional regular season last year, racking up per game averages of 21 points, 5 rebounds, 5 assists and 2 steals on 52 percent shooting from the field, a career best. During the Playoffs, Wade’s knees flared up and he fought through the pain to help Miami clinch their second straight crown, but it was apparent that he was running the court with a busted wheel. He averaged 15.9 points per game during the Playoffs, down from 22.8 a year earlier. During the Heat’s media day last week, coach Erik Spoelstra noted that most players wouldn’t have played under the same circumstances, believing that Wade should be celebrated for gritting it out when his team needed him the most.

Knee injuries have taken out a handful of NBA stars in recent years and the common belief is that once those troubles begin, a player’s career is headed downhill. To get his body right for the upcoming season, Wade reunited with his trainer Tim Grover, a man heavily cited for his previous work with MJ and Kobe Bryant.

“He was definitely hurting last year, there were some physical issues that were going on, like the bone bruise he was dealing with—every time it got banged on it would inflame and get even worse so that kind of limited what he could do,” Grover explains. “Fans and everybody remember what you do now and not what you did in the past, they want to see you perform at that level all the time but nobody knows the difficulties an athlete is going through, you can’t get into that person’s body.”

Grover and Wade had worked together prior, but recently it was from a distance. “This time, we spent a lot of time together,” Grover says. “The last few years it’s been more of us talking and me sending him stuff to do. This offseason was more hands on, which is how I like it. You can judge what type of mind frame a person is when you see them face to face.”

He spent six weeks with Wade, focusing on balancing his body and injury prevention while regenerating his muscle fibers. “The legs are where your support and power and where everything comes from,” Grover says. “It’s nice to have good looking arms, they look good in your jersey during warm ups, but if you want to be an effective and efficient basketball player, it’s the core muscles and the legs that will get you there.”

DWade appears to be fully healthy and looks lean and mean, with early reports from training camp positive. LeBron James has heaped heavy praise on his running mate, describing him as explosive and showing good lateral quickness.

Despite the positivity surrounding his health, Wade sat out of the Heat’s pre-season opener against the Hawks to rest, nothing to worry about according to Grover. “We train our individuals to be successful and play at a high level in June, not during the preseason,” he says.

As for the note Wade penned to Durant, Grover describes it as a sign that Wade is a true cleaner. “The ultimate cleaners, the Larry Birds, the Michael Jordans—they trash talk not to get into other people’s heads, they trash talk to motivate themselves,” he says. “By trash talking, you are forcing yourself to produce. It’s like, ‘Hey, if I’m going to put myself out there like that, I need to continue to progress and motivate myself to be better, and who else to do it against than Kevin Durant. Barring anything unexpected, I think we will see a very exceptional season from him this year. Being healthy has a lot to do with it.”

So add us to the noise, DWade. We hope you prove us wrong. In the meantime, please don’t drop a note on us via IG—we respect your place in history.