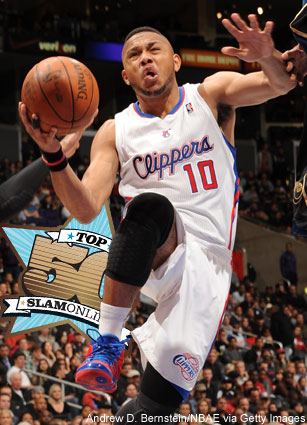 Entering his fourth season in the L, Eric Gordon is as steady as it gets. So much, in fact, that Gordon suffers from that syndrome where one is so consistently good—so habitually on-point—that his contributions often go overlooked and under-appreciated.

But truth be told, you’d be hard-pressed to come across a better 2-man, save Kobe or DWade. There’s an argument to be made that, in terms of bang-for-buck, he’s ahead of cash-guzzlers like Joe Johnson and Monta Ellis, too.

All this being said, SLAM hasn’t been sleeping on EG, as Aggrey Sam has already laid out many of these points in KICKS 14.

After turning averages of 16.1 and 16.9 in his first two seasons, respectively, Gordon stepped it up to 22 per last year, to go along with 4.4 assists and 3 boards. Efficient percentages are always nice, too: 45 percent from the field, 82 percent from the line, 37 percent from deep.

Not a specialist, but a well-rounded, do-it-all type with no major weaknesses, the explosion was to be expected: Gordon was a member of the “B Team” USA that won the FIBA World Championships last summer. Most of that cast went on to have the best seasons of their careers—Derrick Rose, Kevin Durant, Kevin Love, Russell Westbrook and Gordon, in particular. Originally brought on as the token knock-down shooter, Gordon provided far more than that, serving as one of the team’s primary lock-down defenders, as well.

At 6-3, 220, physically, he’s built like a piece of granite. Skill-wise, he’s rock-solid, as well. In fact, it’s the “Rock”—Mitch Richmond—who many have appropriately likened him to. Though a couple inches shorter than Richmond, the comparison is dead-on. Great shooter and scorer, in general, tough slasher, solid defender. One who, despite having the utmost respect of his peers, flew under the radar on the left coast.

But Gordon is far more athletic, and this is where cats really sleep on him at (and how he makes up for being 6-3). He’s got the same 40-inch vert as his 2008 Draft classmate—and former AAU teammate—Derrick Rose. Didn’t know? Don’t believe it? Holla at Tim Duncan, James Anderson, Paul Millsap, or Roy Hibbert for their personal testimonies.

His kryptonite, however, has been his health. While he played in 78 games as a rook, he missed 20 games in his sophomore campaign, and played in just 56 games last season.

If he can manage to keep it together for a full season or, at the least, 70+ games, that will be a major step in him cementing his place in the game. Winning, the universal cure-all, will surely assist him, as well. Thus far, the Clips have improved in each of his three seasons, moving from 19-63 to 29-53 to 32-50.

With a solid core of young talent surrounding Gordon, including the incredible Blake Griffin, things certainly seem to be looking up for the Clippers and Gordon, alike. Don’t be surprised to see him crack the top 25 as early as next season, either.