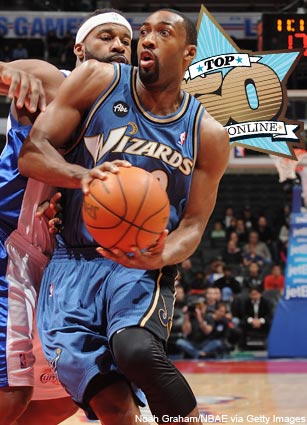 When a buddy of mine selected Gilbert Arenas in our fantasy draft last October, he announced: “Either I’m screwed, or I’ll win the championship.” With one effortless statement, he touched upon everything: the injury history, the superstar potential, the absurd character traits. All of it.

I’ll let you guys guess how that worked out.

Gilby’s ’09-10 started out a little slow. Around Christmastime, he was putting up 23 points a game while averaging 7 dimes and 4 boards per contest. Not a breakout, career-to-the-nex

t-level type of year, but neither my friend nor Wizards fans were complaining. It was still relatively early in the season. Or so they thought.

You know the rest: Arenas and teammate Javaris Crittenton get into an argument about a gambling debt on the team plane. Arenas brings multiple guns into the locker room, leaving them in front of Crittenton’s locker as part of a failed, and frankly, dumb, practical joke. The New York Post reports the incident, which leads to both an NBA and a legal investigation. Amidst swirling rumors, Arenas and his teammates make a pre-game joke out of the whole thing, leading to this picture. (If pictures tend to say a thousand words, that one says a few million.) Arenas is suspended indefinitely, then convicted of gun possession, then spends 30 days in a halfway house. In an effort to rebuild and re-brand, the Wizards: traded both Caron Butler and Antawn Jamison for youth and cap space; finished the season with the League’s fifth-worst record; struck Lottery gold and were given the first pick of the 2010 NBA Draft; selected University of Kentucky sensation John Wall; took advantage of cap-clearing fires sales and traded for role players Kirk Hinrich and Yi Jianlian on the cheap.

And here we are.

As an audience, we’ve never really understood how to categorize Gilbert Arenas. He has (a younger) Allen Iverson’s take-over ability, but (seemingly) without the fire that pushed AI forward year after year. He has the point/shooting guard duality—a result both of his body’s dimensions (6-4, 215) and his ability to score and dish—that tends to confuse us; we prefer to box in our guards as 1s or 2s or Dwyane Wades. And of course, he has that personality: He’s weird and funny and quirky and annoying and awesome and, just, strange—all at the same damn time. There’s none of Dwight Howard’s genuine friendliness, Kobe’s attitude, or DWade’s sense of humor; he’s just Gilbert. That can be tough to grasp.

But forget about all that for a second. Let’s look at the three-time All-Star’s stats, because numbers don’t lie, or something like that. The dude can flat-out score: 22.7 ppg for his career, with 29.3 and 28.4 averages in ’05-06 and ’06-07. (Other notable figures: a 60-point game in 2006, three career 50+-point games, and 20-freaking-6 40-plus point games.) He’s dished 5.6 dimes a game over his nine seasons, and while ball-hogging tendencies have always been the knock against him, Arenas was in the process of responding last year with a solid 7.2 apg before his “incident.” He’s no slouch on defense, either, tallying 1.3 steals a game while often facing up against smaller, quicker and nimbler guys.

And then there’s that range. The former Agent Zero dropped 200-plus threes twice (and hit 199 once), and has practically patented the 30-foot pull-up, a ridiculously ill-advised shot that forces coaches’ hands over their eyes—until it falls in, touching nary an inch of rim. (FreeDarko’s Macrophenomenal Pro Basketball Almanac notes that Gil shoots a higher percentage 28-38 feet from the hoop than he does 23-24 and 25-27 feet from it. I know. I don’t get it either)

Unfortunately, we haven’t been able to witness a complete season of this goodness in a while. A knee injury kept him out of all but 13 games in’07-08, and the next campaign was no better; he played just two games in ’08-09 after receiving a $111 million contract the previous offseason.

The Wizards have swayed between a Lottery team and a one-or-two-and-done playoff team the past decade, and yeah, it might be a reflection of their talent. Management put Gil alongside Caron Butler and Antawn Jamison—two top-of-the-line role players, but guys who’d be better off as the third or fourth best members of a good team—and never gave him a suitable running-mate.

Now with John Wall the future and Gilbert Arenas the past, a question mark defines what’s ahead for Agent Zero in Washington. Can he play alongside the rookie? If there’s anything we’ve learned about the development of young point guards, it’s that they need the ball in their hands to learn the pro game. But slide Gil over to the two, make it clear that he’s taking a backseat and that the team is Wall’s, and maybe he’ll be more useful than ever. He can play off the ball, get buckets at will, and let the point worry about distribution. It could be the role he always needed, but was never afforded.

Regardless, it seems safe to say he’s turning over a new leaf. Since his halfway house release, we’ve barely heard a peep from the man, other than reports that he’s been working out and preparing for the season. (Don’t forget, this is the guy whose blog once captivated the Internet and who took over Twitter before Kanye West and 50 Cent made it all trendy.) Even the story I just to linked to is without an official comment from Arenas, who’s been tight-lipped. Given its provider, this silence is straight up uncomfortable.

And so, we wait and see. Maybe he plays alongside the top draft pick and the two make magic together, maybe his talents have passed him by, or maybe he’s shipped out of town before the trade deadline hits. It’s almost unfathomable that he’ll sit idly by, out of the limelight, while the spotlight shines brighter on other teams in his conference and other players on his own squad. For the time being, though, he sits rightfully at No. 49, where in a moment’s notice he could shoot up the Top 50 or fall swiftly from it. We simply have no idea what this season holds for Gilbert Arenas.

It feels kind of familiar.